The farmers held demonstrations, raised black flags and burned effigies of politicians belonging to the governing Bharatiya Janata Party (BJP), including Prime Minister Narendra Modi, at several places across the country on Wednesday.

“We are observing a Black Day,” Abhimanyu Kohar, a member of Sankyukt Kisan Morcha (SKM), the umbrella body of more than 40 farmers’ unions jointly holding the protests, told Al Jazeera.

“Farmers across the country are raising black flags on their homes, tractors and other vehicles. As part of our protest, we are also burning an effigy of Prime Minister Narendra Modi across the country for failing to address our issues.”

The farmers however say the laws are aimed at providing the private corporations with more control over the vast agriculture sector and will leave them at the mercy of these corporations who will have no legal obligation to pay them the guaranteed price any more.

“We won’t relent until these anti-farmer laws are rolled back,” said Sar Singh, a 40-year-old farmer protesting at Singhu border, the main site of the six-month protest outside the Indian capital, New Delhi.

Singh, who belongs to Tarn Taran Sahib city in the northern state of Punjab, has been protesting at Singhu with his brother since the farmers began their sit-in in late November last year.

He says he is determined to stay until the government is forced to reverse the legislation. “We are ready to protest for many more months. We will leave for our homes only when our demands are met,” he told Al Jazeera.

Like Singh, thousands of farmers demanding a rollback of the farm laws have camped at three main highways linking the capital with the neighbouring states of Punjab, Uttar Pradesh and Haryana.

Some of these farmers have set up permanent shelters made of bricks and cement on the highways to deal with the country’s scorching summer.

“We are being forced to do this. We are not keen to protest on roads. But this government is not serious. As of now, there is not even an ongoing dialogue between the farmers and government. The last meeting we had was in January,” Kohar told Al Jazeera.

“The moment the government agrees on withdrawing the laws and promises to continue procuring our produce at the Minimum Support Price (MSP), we will return to our villages,” he said. 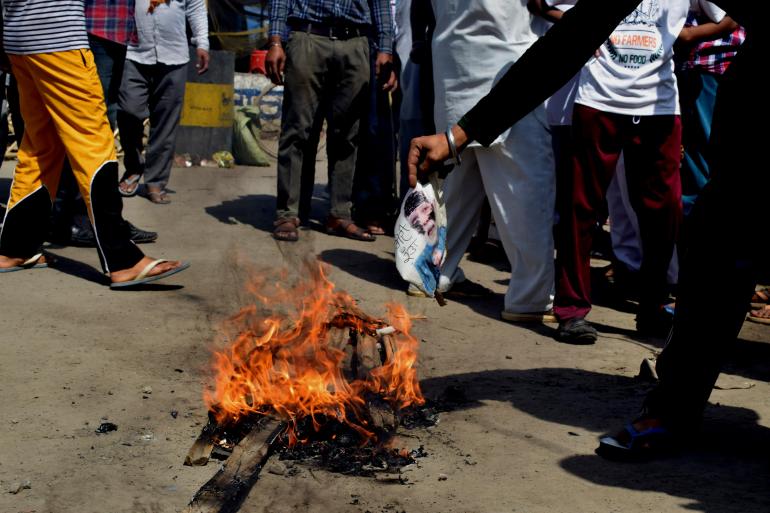 MSP is a mechanism that ensures a minimum price to the farmers for their harvest by the state.

Multiple rounds of talks between the farmers’ unions and the government have failed to reach a breakthrough.

Earlier this year, Modi’s government had offered to put the farm laws on hold for 18 months, but the farmers rejected the offer, saying they want a complete repeal.

Meanwhile, authorities and health experts have expressed concern over the months-long protests being held amid a ferocious second wave of the coronavirus pandemic.

Most of India’s states are under lockdown for the past few weeks to control the virus, which has claimed more than 300,000 lives, while the country’s overall caseload is now at 27.37 million.

Nearly half of these deaths happened during the devastating second wave, fuelled by large regional election rallies addressed by Modi and other politicians, and a weeks-long religious festival along the banks of the Ganges River.

Gauravdeep Singh, 25, from Punjab’s Ludhiana district, has been protesting at Singhu for months, often doubling as a volunteer. He says unlike the politicians of the country, farmers have been following COVID-19 safety protocols.

“We are taking precautions at the border and there is no outbreak of the disease here. Many social and non-governmental organisations are helping us to keep the protest sites safe from infection,” he told Al Jazeera.

“This government organised mass rallies and held elections in various states recently. On what moral grounds are they blaming us for being negligent in observing COVID safety measures? Had the virus disappeared then?”

As the farmers remain resolute in their demands for a repeal of the farm laws, the governing BJP has made it clear the legislation will not be withdrawn.

“The government is clear about its stand. It is ready to amend the laws after deliberations but there is no way we are withdrawing them,” BJP spokesman Raman Malik told Al Jazeera.

Malik alleged the protests are being pushed by “politically-motivated elements who have no concern for the wellbeing of the farmers”.

“The laws seek to provide additional and alternative provisions for farmers, but there are some forces in the country who merely want to score political points and don’t want the betterment of farmers,” he said.

But critics of the government accuse it of being “insensitive” towards the plight of farmers.

Activist Shabnam Hashmi says the current government is “in collaboration with the corporates” and was never serious about solving the farm crisis.

“The government, rather than solving the crisis, tries everything to delegitimise the farmers’ movement using the state-controlled media,” she told Al Jazeera.

Kavita Krishnan, member of the opposition Communist Party of India (Marxist–Leninist) party, told Al Jazeera Modi’s government is “squarely responsible for the mismanagement” of the crisis.

“The government, by refusing to withdraw the three anti-farmer laws, is contributing to the spread of COVID because farmers have no option but to continue to resist the laws in thousands, since the laws are a death sentence for their livelihood and for Indian agriculture,” she said.