Lakshadweep is an idyllic archipelago of 36 islands – 10 of them inhabited – spread over a 32-square-kilometre area in the sea, about 200 km off the southwestern coast of the Indian Peninsula.

Residents in the smallest among India’s eight “Union Territories” (UTs), with a population of 65,000 people – 97 percent of them Muslims – are fearful of a series of moves by its right-wing administrator appointed by the federal government. 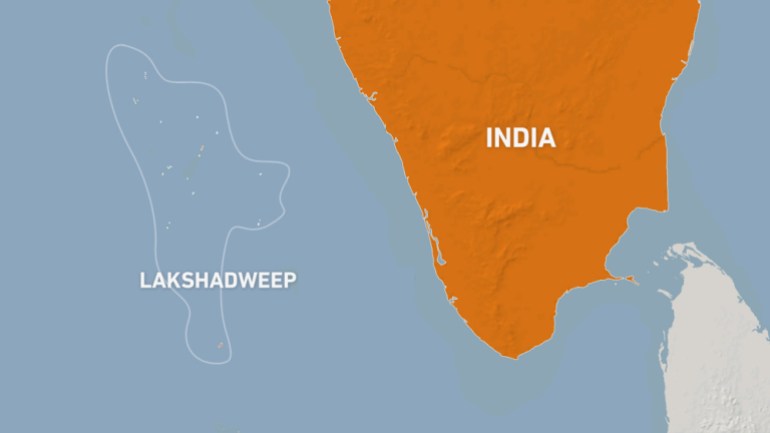 Praful Khoda Patel, who belongs to Prime Minister Narendra Modi’s Bharatiya Janata Party (BJP), is the first non-bureaucrat administrator of the Lakshadweep Islands. Patel once served as the home minister of Gujarat state when Modi was its chief minister.

Since he took over the Lakshadweep administration in December last year, Patel has pushed through a slew of new laws and regulations without consulting locally elected representatives in India’s only Muslim-majority territory apart from Indian-administered Kashmir.

Residents say the proposals threaten their livelihoods, land ownership, culture and even the fragile ecology of the tropical islands.

The controversial proposals range from a ban on beef, disqualification of people with more than two children who wish to contest the village council elections, to taking over land belonging to the locals for the purpose of development without safeguarding the interests of the landowners.

While the proposals are currently being considered by the federal home ministry, several opposition parties, including the Congress, are demanding they should be dropped and the 63-year-old administrator recalled.

Threats to land rights and jobs

The most controversial legislation introduced by Patel is the Draft Lakshadweep Development Authority Regulation 2021, which would allow the administration to acquire the land of residents to build highways, railway lines and other infrastructure projects.

There are plans to build roads “as wide as 15 metres”, but locals say Lakshadweep does not need highways, and that such projects will damage the islands’ fragile ecology.

“There is no scope or need for bigger roads,” Abdul Kader, president of Kavaratti village council, told Al Jazeera.

Dr Muneer Manikfan, a diabetologist who is also the vice chairman of Minicoy local council, an island close to the Maldives, said the draft proposal’s idea of an “area with bad layout or obsolete development” is arbitrary.

“The administration can publish a development plan for an area irrespective of whether the area is populated or not. People can be relocated to anywhere the administration likes,” he told Al Jazeera.

“The local community will forever have to live in fear of their property being taken over by the administration anytime.”

Even if permission is granted for development, the draft in some cases says the maximum period allowed will be three years. That means an islander can make her house standing for only three years. Then the fate of her building is at the mercy of the authority.

“If we need to construct an additional bedroom, say, for our children’s marriage, we can’t. For a 1000-square-feet house, the additional structure shouldn’t be more than 100 square feet,” says activist Cheriya Koya.

Section 72 of the draft Planning and Development Authority proposal allows the administration to evict a person from a property that “he is not entitled to occupy”. Manikfan says the section infringes on one’s right to property.

Muslims in Lakshadweep, classified as a Scheduled Tribe, are one of the rarest Muslim groups in India to be granted reserved quota in government jobs and seats at educational institutions run by the state.

Residents say the Lakshadweep administration also aims to usurp the local executive powers of the elected village and district councils.

The elected council representatives will not be able to make decisions on many issues that directly affect people such as healthcare, agriculture, education, and animal husbandry and fisheries, as these subjects would come under the direct control of the administration if the proposal is accepted.

A government employee who spoke to Al Jazeera on condition of anonymity said about 500 casual and contractual workers employed in various government offices lost their job after the new administration took over.

“They want to fill those vacancies with labourers brought in by the contractors from outside,” the employee said.

Residents also say a number of dairy farms have been closed and their cattle auctioned off, citing non-feasibility. They allege that Patel’s plan is to bring in a dairy giant based in Gujarat to set up its retail outlets across the islands.

Patel has also proposed a ban on the sale of beef and the slaughter of cows, calves, bulls and steers, in line with Hindu beliefs.

According to Lakshadweep Animal Preservation Regulation, 2021, no person can directly or indirectly sell, transport, offer for sale, or buy beef or beef products in any form anywhere in the Muslim-majority islands, with violators facing up to 10 years in jail.

A section of upper-caste Hindus considers the cow a sacred animal, whose slaughter is banned in many states across India. Cow slaughter is one of the right-wing BJP’s main populist planks.

According to another proposal, non-vegetarian food options on the menus of “anganwadi” (neighbourhood) state-run preschool childcare centres could also be removed, while the administration has banned beef from the midday meals provided to schoolchildren.

Recently, the administration shut down dozens of “anganwadi” pre-schools.

Patel is also planning to permit the opening of liquor bars and shops, claiming the move will boost tourism on the islands, which are currently a non-alcoholic zone due to their Muslim population.

Manikfan says liquor is not “socially acceptable and culturally desirable” for Lakshadweep.

The bill has angered the locals in Lakshadweep, which has one of the lowest crime rates in the country. Residents say there is no need for such a “draconian” legislation.

So why has such a harsh law been introduced? “To jail the people who criticise the administrator and his plans,” says activist Hussain Shah.

One of Patel’s earliest actions included booking criminal cases against three people, including local Congress leader MA Atta for putting up a banner in Kavaratti, the capital island of Lakshadweep, criticising the controversial Citizenship Amendment Act passed by Modi’s government in 2019.

Lakshadweep had remained coronavirus-free throughout 2020 because of the strict protocol necessitated by its poor health infrastructure with just three hospitals for the 10 inhabited islands.

People bound for the islands had to be quarantined for seven days in the Indian mainland – in Kochi, Kozhikode or Mangalore cities – under the administration’s supervision before boarding a ship or flying.

Even after reaching Lakshadweep, they were asked to remain in quarantine for another seven days.

But Patel is accused of exacerbating the COVID-19 crisis in Lakshadweep after he changed the protocol in January by allowing anyone entry into the islands with a negative RT-PCR report obtained 48 hours before their travel.

A week after the rules were changed, the territory reported its first coronavirus case on January 17. Until Friday, the island had recorded close to 7,500 total cases, with nearly 30 deaths.

‘Patel has a few companies in mind’

Meanwhile, a clamour to scrap the legislations proposed by Patel and remove him from his position grows louder across India.

Elamaram Kareem, a member of parliament from the Community Party of India (Marxist), blamed Patel for the spread of the coronavirus on the islands in his letter to President Ramnath Kovind and demanded the “anti-people” proposals be rejected.

In his letter, Kareem said the standard operating procedure (SOP) in force in the Union Territory to curtail the spread of COVID-19 was unilaterally changed by Patel.

“This unplanned and unscientific altering of the SOP has led to the current surge in COVID cases in Lakshadweep, where there was not even a single case reported in the year 2020,” he wrote.

“New regulations, including a ban on the slaughter, transport, selling and buying of beef, are an onslaught on the people. Hundreds of casual and contract laborers working under different departments have lost their jobs.”

Kareem said Patel’s aim is to hand over the territory of Lakshadweep to people close to the administration.

“These measures were proposed so the land and resources of the islands could be handed over to the corporate sector,” he told Anadolu news agency.

“Many big corporations have been eyeing the land here and want to set up their businesses here. The administrator wants to hand over the valuable lands to them. He is furthering the business interests of people on the mainland.”

AP Abdullakutty, BJP’s national vice president who is also in charge of Lakshadweep, denied the allegations.

“People are protesting mainly against the new rules of the administrator. But no new rules have been implemented. Only a proposal on building rules regulations was made, which will be discussed with locals before submitting it to the government,” he said.

But Lakshadweep’s member of parliament, PP Mohammed Faisal, said Patel “has a few companies in mind and he is trying to provide land to them”.

“That’s why he is taking such measures,” he said. “The drafts under the consideration of the Home Ministry should be scrapped, as people are against them. Twelve draft notifications are in the queue. People aren’t in a position to respond to them. They’re not in a position to move out.”