In an announcement from the presidential palace on Monday, the country said more than 180,000 people had died since the start of the pandemic – up from previous data indicating that 69,342 Peruvians had died due to the coronavirus.

The new toll includes deaths reported between March 2020 and May 22 of this year.

“What is being said is that a significant number of deaths were not classified as caused by COVID-19,” said Health Minister Oscar Ugarte, adding that the criteria for assigning the novel coronavirus as a cause of death had been changed.

Ugarte said that previously only those who “had a positive diagnostic test” were considered to have died due to the virus, but other criteria have since been added.

Mateo Prochazka, one of the researchers in a working group commissioned to analyse and update Peru’s coronavirus death toll, said the team used four different methods to determine cause of death.

“The first criterion is the one with the greatest certainty, the virological one, in the case of people who have a positive test. The second is the rapid test,” Prochazka reportedly said.

“We also used serological [tests] because, in the beginning of the pandemic, this system was used a lot,” he said.

“Then there are radiological and epidemiological [tests], through which there is no proof, but compatible symptoms are found,” he said. “We considered that they should be accounted for.”

Most cases per capita

Among Latin American countries, only Brazil and Mexico have reported higher overall death tolls from the disease than Peru.

Based on population, however, Peru’s per capita death toll is now the highest in the world and more than doubles that of Brazil, according to Johns Hopkins University data. 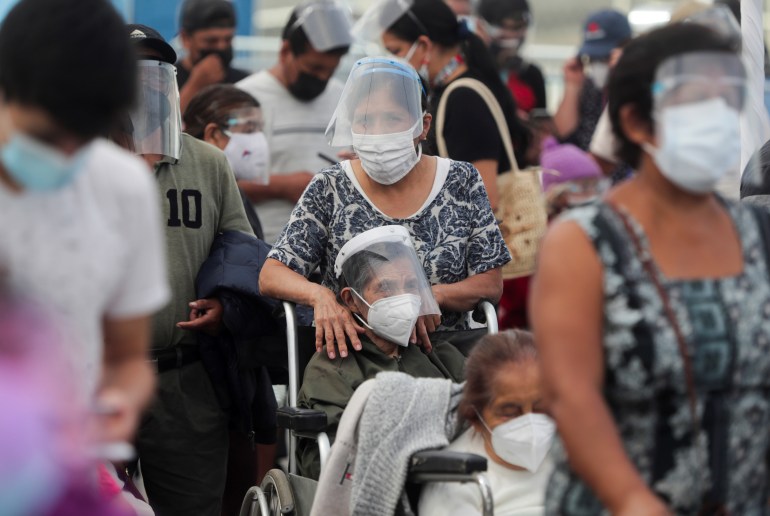 Scenes of cemeteries filling up with new burials and hospitals buying refrigerated containers to act as makeshift morgues suggested the situation was far worse than the official data showed.

“We think it is our duty to make public this updated information,” said Peru’s prime minister, Violeta Bermudez, during the news conference on Monday.

Peru’s updated numbers are in line with so-called “excess deaths” figures, which researchers have used in Peru and other countries to measure possible undercounting.

Excess deaths are calculated by comparing the total number of deaths over a period of time and the same period pre-pandemic.

Dr Julio Ponce, an epidemiologist based in Brazil, told Al Jazeera that excess death totals are one of the ways to measure the toll of COVID-19 when testing is not readily available.

“When you do not have access to testing, you shouldn’t just be counting people who have tested positive and who eventually died of COVID, because of course a great number of people won’t be being counted in those figures,” Ponce said.

He added that if a country can’t accurately count the number of COVID-19 cases and deaths, they will not be able to track where the pandemic is going next.