The Marine Environmental Protection Authority (MEPA) says it has already sought compensation from the company that owns the ‘X-Press Pearl’ cargo ship for the economic damages caused by its fire.

Chairperson of MEPA Attorney-at-Law Dharshani Lahadapura stated that the compensation was sought through the Attorney General. 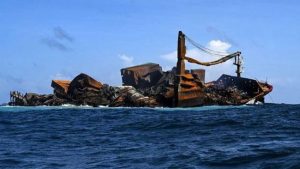 In addition to this, compensation for the environmental damage caused by the fire is also expected to be sought from the company, Lahadapura said.

She said, “The first claim for compensation has already been made. We have asked them for the damages that can be taken directly. Meanwhile, an expert committee is working on the environmental damages. The second request [for compensation] will be made after receiving this report,” she said.

Meanwhile, nearly 40 containers of waste released into the environment from the ship have been removed so far, the Chairman said.

She further stated that most of the waste has been washed ashore in the Sarakkuwa area.

She pointed out that one container containing the discarded waste weighed approximately 20 metric tons.

The Criminal Investigation Department (CID) has so far recorded statements from about 20 people regarding the incident of the ‘X-Press Pearl’, said Police Media Spokesman, DIG Ajith Rohana.

The Voyage Data Recorder (VDR) of the ship was taken into the custody of the CID yesterday (June 06) with the assistance of the Sri Lanka Navy.

The DIG pointed out that the communications between the parent company of the ship and the local agent were more important for the investigation.

He further said that special attention will be paid to the instructions given after checking the data in the recorder.