The Ministry of Foreign Affairs has expressed its regrets over the adoption of a resolution on Sri Lanka in the European Parliament on 10 June 2021. 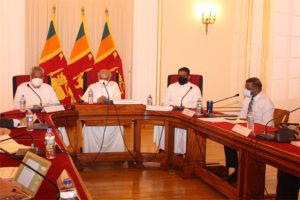 The resolution entitled “The Situation in Sri Lanka, in particular the arrests under the Prevention of Terrorism Act”, contains factual inaccuracies, and does not take cognizance of the multifaceted progress made by Sri Lanka in reconciliation and development, the Foreign Ministry said in a statement issued on Monday (June 14).

“At the outset, the Ministry wishes to state that provisions of the Prevention of Terrorism Act have been invoked to address heinous acts of terrorism committed on its people.  In this context. It is recalled that the Easter Sunday terrorist attacks of 2019 resulted in significant loss of life, including of several EU nationals.”

The statement stressed that it is important to underscore that the Sri Lankan government maintains a regular, vibrant and cordial dialogue with the European Union (EU), covering all aspects of bilateral relations. “The engagement is sustained through the close and cordial dialogue maintained with the European Commission, the Council and the Parliament by the Sri Lanka Mission in Brussels; and with the EU delegation and EU Ambassadors in Colombo by senior interlocutors of Government.”

As part of this process, Sri Lanka has constructive engagement with the European Commission on the review of its EU GSP + compliance with the 27 core International Conventions, the ministry said further adding that the Third Cycle of Review of the EU GSP + Monitoring Process for 2020-2021 is ongoing, towards this end.

Sri Lanka has apprised the EU on progress with regard to its wide range of cooperation at the annual EU-Sri Lanka Joint Commission, the 23rd session of which was convened in January 2021.  Further updates are provided through the relevant Working Groups and Committees functioning under the purview of the Joint Commission, the ministry continued.

With regard to salient points referred to in the resolution, the Ministry submitted the following observations with a view to correction:

The Government has, in accordance with its constitutional mandate and international obligations, taken steps to protect the rights of all its citizens.  Specific provision in terms of Article 12 (1) of Sri Lanka’s Constitution ensures that all persons are equal before the law and are entitled to the equal protection of the law.  Article 12 (2) of the Constitution prohibits discrimination based on race, religion, language, caste, sex, political opinion, place of birth or any such grounds.

The Government is in the process of revisiting provisions of the Prevention of Terrorism Act, in keeping with its commitments, as has been communicated to the EU. Towards this endeavour, the Government is studying existing legislation to propose necessary amendments, and will also draw on international best practices adopted by other jurisdictions. The Government rejects the claim that the PTA has been systematically used for arbitrary arrests and the detention of Muslim or other minority groups in Sri Lanka.

It is observed that the 20th Amendment was enacted in full compliance with the procedure set out in the Constitution with a two thirds majority of the Members of Parliament voting in its favour.  With regard to such legislation, a number of in-built safeguards relating to transparency and judicial review aimed at preventing the passage of bills that are inconsistent with the Constitution, including its Fundamental Rights chapter, have been adhered to.

The Government has regularly updated the Human Rights Council as well as EU interlocutors on the measures undertaken to address issues of accountability, and to achieve continued progress in reconciliation.  Mechanisms in place in this regard include the Presidential Commission of Inquiry headed by a Justice of the Supreme Court; the Office of Missing Persons; the Office of Reparations, the Office of National Unity and Reconciliation; the Human Rights Commission of Sri Lanka; and related institutional reforms aimed at non-recurrence and other confidence building measures.  With regard to sustainable development, the Inter-Ministerial Committee headed by the Prime Minister to steer SDG implementation is of significance.

Sri Lanka’s labour rights, including health and safety conditions, are in compliance with ILO standards.  Sri Lanka’s high labour standards maintained in production, have led to better quality products, and high value added exports, as reflected in the apparel sector.  The higher demand for ‘ethical’ products from Sri Lanka has led to increased production, subsequent investment, and improvement of the human capital in Sri Lanka.  The EU GSP + concessions have contributed significantly towards this process, thus benefiting the Sri Lankan economy, as well as the EU market.  Similarly, the fishery sector is a notable growth sector which has benefited from EU GSP + concessions.

Sri Lanka, as one of the oldest parliamentary democracies in Asia, has a longstanding vibrant democracy.  The country’s robust foreign policy is based on the principles of neutrality, non-alignment and friendship. The Government is committed to further strengthening its democratic institutions.  As asserted by the Spokesperson of the 06th EU Election Observation Mission to Sri Lanka in November 2019, which comprised Members of the EU Parliament, the peaceful environment in which the election unfolded ‘confirms the stability of the [country’s] democratic institutions.’  These remarks remain valid.

The COVID-19 pandemic continues to have a devastating impact globally, placing drastic limitations upon the right to safety, health, economic security, and even the right to life of millions of people across the globe.  Sri Lanka continues to face challenges in spite of consistent and concerted efforts by the Government to safeguard its entire population against the pandemic, and to provide equitable access to vaccines.  In this backdrop, the Government appreciates the commitment of global multilateral institutions and UN agencies to uphold the economic, social and cultural rights of all peoples, which are intrinsically linked to civil and political rights.  Sri Lanka’s commitment to upholding human rights continues in tandem with its current priorities of inoculating its targeted population, providing healthcare and economic revival.

The Foreign Ministry emphasized that, in these critical times, Sri Lanka should be supported in safeguarding the rights of its people, while taking cognizance of demonstrated progress on the ground.

The Sri Lankan government looks forward to continuing its partnership with the EU on a broad range of issues, and reassures the EU of its continued commitment to engage proactively and productively on areas of mutual interest, the statement read further.

Foreign Minister Dinesh Gunawardena has briefed Chargé d’Affaires of the Delegation of the European Union in Colombo Thorsten Bargfrede, as well Colombo-based EU Ambassadors / Chargé d’Affaires from France, Italy, Romania, Germany and the Netherlands, on the Sri Lanka Government’s position as detailed above, at a meeting convened at the Foreign Ministry on Monday.