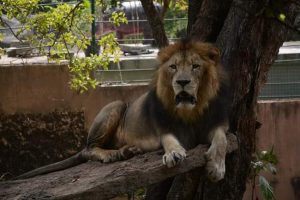 Accordingly, the health officials and the Department of National Zoological Gardens have decided to seek the assistance from India to treat the coronavirus-infected lion.

Ever since it was brought to Sri Lanka from South Korea in 2012, the lion, called ‘Thor’, had been in the exhibit at the Dehiwala Zoo for the past nine years.

Speaking on the matter, State Minister of Wildlife Protection Wimalaweera Dissanayake said an investigation into the incident is now underway. He stated that although it is yet to be confirmed if the lion is infected with the virus, the animal is under medical care.

The state minister said the lion was directed to a PCR test as it had been unwell for the past few days, showing various symptoms. The test has been carried out by the Veterinary Teaching Hospital.

According to reports, two other animals held at the Dehiwala Zoo have also died suddenly. However, the state minister noted that the cause of death was not coronavirus infection.

Deputy Director General of Health Services Dr. Hemantha Herath, who spoke in this regard, stated that relevant authorities have already started to look into the incident. He said discussions will be held with the officials of the Dehiwala Zoo to confirm how the lion was infected, if the staff members have contracted the virus and whether the virus has spread out of the zoo premises.