China’s unemployment rate has steadily dropped from last year’s pandemic peak though a lack of jobs for graduates and a shortage of skilled manufacturing workers point to underlying problems in the labor market.

The urban jobless rate fell to a two-year low of 5% in May, official data showed last week, but unemployment for those between the ages of 16-24 — which captures graduates from school and college — was more than double that at 13.8%. 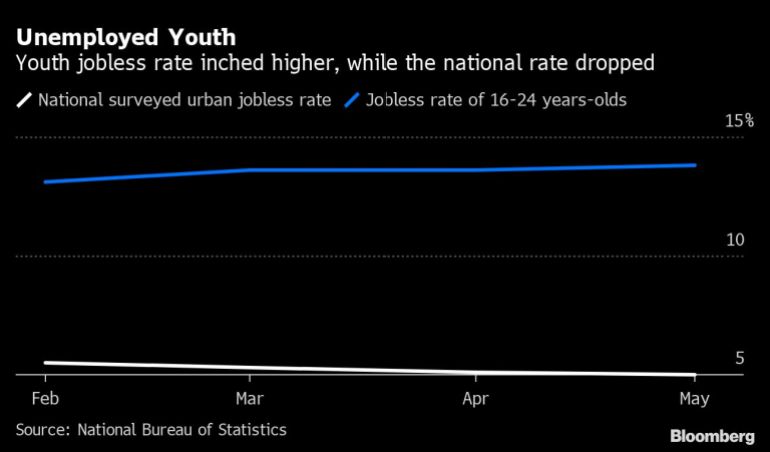 Anecdotal reports suggest a mismatch between jobs and skills in the economy, which could prevent the jobless rate from falling much further. Part of the reason is China’s unbalanced economic growth since the pandemic, with services industries — which are more suited to graduate jobs — slower to recover than manufacturing.

“Exports and investment, including in heavy industries and real estate, are driving the rebound but this demand does not create the type of jobs suited for many of today’s graduates,” said Shaun Roache, chief economist for Asia Pacific at S&P Global Ratings.

The structural problem has persisted for much of this year. In a survey of 90,000 companies published by China’s statistics bureau in mid-April, about 44% of industrial firms said recruitment of workers is their biggest obstacle, the highest level in recent years.

The National Bureau of Statistics said last week that about 14 million people are expected to enter the urban workforce this year, of which 9.09 million are graduates. China has a full-year target to add more than 11 million urban jobs.

“The phenomenon of fresh graduates struggling to find jobs and companies having difficulties to recruit workers exist at the same time,” Fu Linghui, a spokesman for the NBS, said last week.

The pandemic had driven many manufacturing workers, especially migrants, into the services industry. However, analysts also point to several longer-term factors that are draining the number of blue-collar workers: manufacturing jobs aren’t appealing to younger workers, the pay is generally lower and there’s a lack of skills training on the job.

“Rebalancing, from investment to consumption and from manufacturing to services, has stalled since Covid but it will need to resume for the economy to start generating enough well-paid, urban jobs for new job market entrants,” said S&P’s Roache. 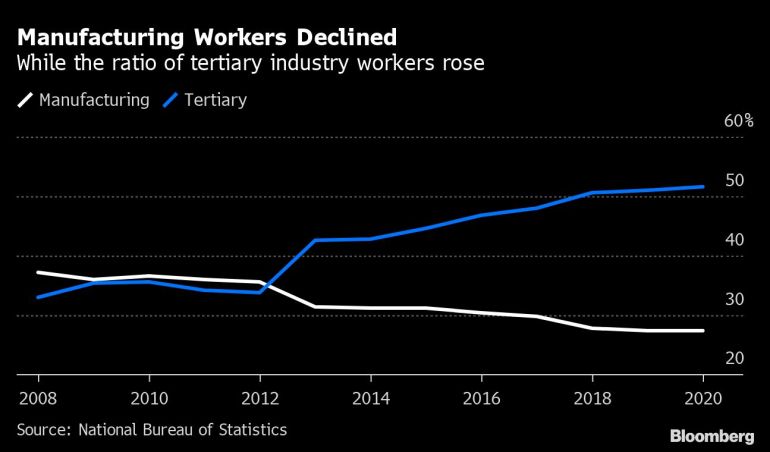 The U.S. is also facing a problem of labor shortages coupled with millions of unemployed people unable to find jobs. Federal Reserve Chairman Jerome Powell cited the skills gap, as well as child care obligations and lingering virus fears, as possible reasons for that dichotomy.

China’s government is now stepping up its vocational skills training as a way to alleviate the structural problem in employment, with Premier Li Keqiang addressing the issue at a meeting earlier this month. Authorities also vowed to expand jobs for college graduates, provide better career counseling services and facilitate information flow between job seekers and employers.

“The overall jobs pressure is still there,” the NBS’s Fu said. “As the next step, we’ll need to maintain necessary support for the economic recovery, push for the creation of new jobs, implement a jobs-first policy and expand employment” for key groups of workers.

Beijing had set a target by the end of this year to train more than 50 million people, including migrant workers, high school graduates, furloughed workers and former soldiers, using government subsidies. Skilled workers should account for more than 25% of the total workforce by the end of 2021, according to the plan.

With the labor force shrinking and getting older, China’s next phase of growth will need to come from productivity gains driven by improved skills and innovation, McKinsey Global Institute said in a report released in January. It estimates that by 2030, about 220 million workers, or 30% of the workforce, may need to move into higher-skilled jobs.