When the ball left the instep of Marco Verratti’s right boot, low and floaty into the wall, it seemed a miscued shot. But Matteo Pessina, prancing on the edge of the penalty box, slithered in unattended and flicked the ball into the far corner, performing the last piece of a fine-tuned deception act, refined to perfection on the training pitch. 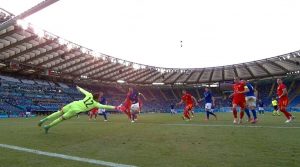 The deception was multi-layered. It began with the textbook placement of Italian personnel in the box. Two just behind the Wales red wall; two in front of the wall, spaced out and ready for the decoy run to distract the Welshmen, then one to the left of the farthest Welshman in the box and two converging into the free-kick.

The positioning was straightforward enough; either the right-footed Veratti would curl the ball away or the left-footed Federico Bernardeschi would curl it in. One of the two men standing behind the wall would twist their neck and look to get some part of their heads to the ball.

Just as Verratti stroked the ball — free-kick isn’t really the right word to describe it, it was more a free-pass — the eyes of the Welshmen began tracing an imaginary parabola in the air – the route Verratti did not take.

Some of the Welshmen had already jumped, their eyes fixed on the sky than the ball, a couple of others had rushed forth to cut the gap between the wall and the goalkeeper, a couple had begun tugging at the jerseys of the designated headers. In the melee, they forgot Pessina, apparently the decoy runner. The Atalanta midfielder just galloped in, froze in his stride, and calmly side-footed the ball into the corner, riding the bounce of the ball with balletic elegance.

It was not so much about the ingenuity of the goal as it was about the perfection of it. Verratti’s kick was neither under-hit nor over-hit. It was neither too high nor too low. Pessina timed his run to perfection, he neither over-ran nor under-ran himself. The ball hit the perfect spot of his boot too, on the inside half, a couple of centimetres back or in front, it would have ballooned askance. There was an understandable wave of elation in the dugout, as such routines are often conceived and polished on the training pitch. Predetermined than a leap of imagination.

Thus, with each passing game, Italy are showing that there are more strings to their colourful bow than was originally presumed. Their set-piece proficiency should be least surprising though, as they have historically not only relied heavily on the dead ball but also possessed experts in making the dead ball trace unseemly patterns with their feet. Roberto Baggio, Francesco Totti and Andrea Pirlo, to name but a few of their free-kick visionaries. It’s even less surprising when they have a manager who fetishes free-kicks.

Roberto Mancini was not a dead-ball artiste in his playing days. He needn’t be, for there were always others around him. The highly successful Lazio team he played in relied heavily on the free-kicking genius of Siniša Mihajlović, who once scored a hat-trick of free-kicks and orchestrated the most memorable goal of Mancini’s career, a back-heel on the run from Mihajlović’s whipped-in corner. Lazio had a fine tessellation of free-kick virtuosos, with Pavel Nedved and Marcelo Salas too hovering over a dead ball. Later arrived Juan Sebastian Veron. So wherever he coached, Mancini ensured that his teams had not just free-kick experts but were stocked with a variety of free-kick drills that made them unpredictable as much as multidimensional.

In the four years he spent at Manchester City, Mancini assembled a fine array of set-piece talents. David Silva for wicked swerves and dips, Yaya Toure for directness and power, James Milner for his whip. To beat boredom, his teams would experiment with improvised training pitch drills, like the Verratti-Pessina duet that was more a death-knell than music to Welsh ears.