India on Tuesday declared the Delta plus variant of COVID-19 as a variant of concern and also issued an advisory to 3 states, Maharashtra, Kerala and Madhya Pradesh where this strain has been detected in 22 samples, to take immediate measures to curb its spread. 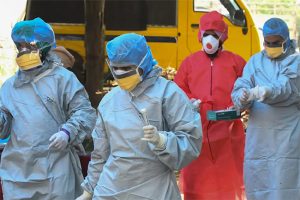 In the advisory issued, state chief secretaries of the three states have been asked to take up immediate containment measures in the districts with clusters, as identified by the Indian SARS-CoV-2 Genomic Consortia (INSACOG), including preventing crowds, intermingling of people and widespread testing.

The other crucial measures suggested to spread the curb of the mutant virus include prompt tracing as well as vaccine coverage on a priority basis. The states, through the advisory, were also asked to send adequate samples of positive persons promptly to the designated laboratories of INSACOG so that the clinical epidemiological correlations can be made.

INSACOG, a network of 28 laboratories in the country, has attached Delta plus variant with increased transmissibility, stronger binding to receptors of lung cells and potential reduction in monoclonal antibody response, the Union health ministry announced.

The districts where this VoC has been found in genome sequenced samples include Ratnagiri and Jalgaon districts of Maharashtra, Palakkad and Pathanamthitta Districts of Kerala and Bhopal and Shivpuri districts of Madhya Pradesh.

This variant has also been identified in 9 countries – US, UK, Portugal, Switzerland, Japan, Poland, China and Russia, apart from India—so far and has raised worries that it may be resistant to existing COVID vaccines though this fact is yet to be established.

Scientists working with INSACOG explained that the new Delta plus variant has been formed due to further mutation in the Delta or B.1.617.2 variant, first identified in India which was largely responsible for the ferocious second COVID wave in the country.

“There is an indication that Delta plus variant may be more apt to cause severe COVID19 and is also looking better designed to evade monoclonal antibody cocktail treatment for the infectious disease—these facts definitely are causing a lot of anxiety,” said an expert.