Former President Maithripala Sirisena refutes the media reports that he is to be sworn in as a Minister calling them untrue. 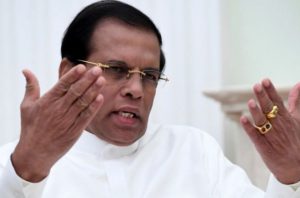 The announcement was made by the private secretary of the former president, Sameera de Silva.

It reads that the former president Sirisena has not requested the government for a ministerial post or any other post.

The statement further states that Maithripala Sirisena does not intend to obtain any such post.