China’s President Xi Jinping on Thursday warned that foreign forces attempting to bully the nation will “get their heads bashed”, and hailed a “new world” created by its people as the ruling Communist Party marked the centenary of its founding. 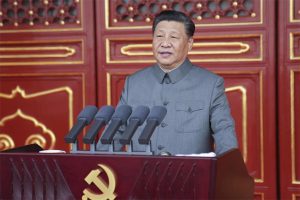 In an hour-long address from Tiananmen Square, Xi pledged to build up China’s military, committed to the “reunification” of Taiwan and said social stability would be ensured in Hong Kong while protecting China’s security and sovereignty.

“The people of China are not only good at destroying the old world, they have also created a new world,” said Xi, China’s most powerful leader since Mao Zedong, the founder of the People’s Republic. “Only socialism can save China.”

Xi and the party are riding high as China recovers briskly from the COVID-19 outbreak and takes a more assertive stance on the global stage.

But Beijing faces external criticism over its clampdown in Hong Kong and treatment of ethnic minorities in Xinjiang, and is dealing with a worsening demographic outlook that imperils long-term economic growth.

A survey of 17 advanced economies released on Wednesday by the U.S.-based Pew Research Center showed that views about China have remained broadly negative and confidence in Xi near historic lows.

On Thursday, Xi said that the people of China would never allow any foreign force to bully, oppress, or subjugate them.

“Anyone who dares try to do that will have their heads bashed bloody against the Great Wall of steel forged by over 1.4 billion Chinese people,” he said, sparking applause from an invited audience of 70,000 gathered in the massive square in central Beijing. The phrase became the top trending topic on China’s Twitter-like Weibo on Thursday morning.

Tang Renwu, a professor of public management at Beijing Normal University, said the tough talk was in response to U.S. and western efforts to “contain” and “suppress” China.

“Xi’s stronger-than-usual response would have the effect of invoking even more patriotic and nationalistic sentiment among the Chinese people,” Tang said.

China, whose rapid military modernisation has fuelled growing worry among its neighbours and in the West, will build up its armed forces to safeguard its sovereignty, security and development, elevating them to world-class standards, Xi said.

“We must accelerate the modernisation of national defense and the armed forces,” said Xi, who is also chairman of the Central Military Commission, which controls the country’s armed forces.

Resolving the Taiwan question and realising China’s complete “reunification” is an “unswerving historical task” of the party, Xi said.

“All sons and daughters of China, including compatriots on both sides of the Taiwan Strait, must work together and move forward in solidarity, resolutely smashing any ‘Taiwan independence’ plots,” he said.

China, which considers democratically-ruled Taiwan its own, has stepped up efforts to assert its sovereignty claims, including sending fighter jets and bombers close to the island.

Regarding Hong Kong and Macau, Xi said China will “stay true to the letter and spirit of the principle of ‘One Country, Two Systems’,” under which the two are promised a high degree of autonomy.

However, a sweeping national security law imposed on Hong Kong a year ago has seen Beijing drastically tighten its grip on the once freewheeling financial hub. The traditional July 1 protests marking the anniversary of the city’s 1997 handover to Chinese rule were thwarted as police denied permission for a rally, citing coronavirus restrictions.

Thursday’s celebrations began with a flyby of fighter jets and helicopters observed by the nation’s leaders, seated at the southern ramparts of the Forbidden City. A 3,000-strong chorus sang seven socialist songs during the event.

The Chinese Communist Party initially recruited peasants and workers but has evolved to embrace markets and entrepreneurship under “socialism with Chinese characteristics” while retaining a Leninist model of authoritarianism.

Xi said the “interests and destiny of all people in China” were tied to the party leadership and any attempt to turn the people against the party was bound to fail.

“The more than more than 1.4 billion Chinese people will never allow such a scenario to come to pass,” he said.

A 60-year-old teacher surnamed Wang who was photographing the overflying jets from a park on Thursday said he has much admiration for the party.

“Whether it’s chairman Mao, or Deng Xiaoping, or today’s leaders, it’s not easy for them – if you brought foreign leaders here and show how they manage 1.4 billion people, making sure they all have food to eat and a good life, it’s truly not easy.”