President Gotabaya Rajapaksa on Friday (July 02) instructed health sector officials to vaccinate all people over the age of 30 years in the Western Province before the 31st of July. 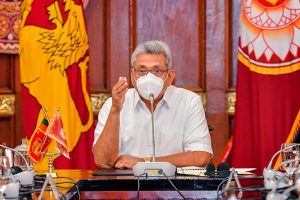 The President’s Media Division (PMD), in a press release issued in this regard, said 60% of the people in this age category in Colombo District, 47% in Gampaha District and 34% in Kalutara District have been administered the first dose of vaccine so far.

President Rajapaksa has emphasized the need to inoculate a higher percentage of people in all parts of the country before September in a systematic manner following the receipt of vaccines that have been ordered.

The President gave these directives during a meeting held at the Presidential Secretariat this morning with the Special Committee on COVID-19 Control on the vaccination drive and future operations.

According to the PMD, the President has expressed confidence that Sri Lanka would soon receive the required amount of AstraZeneca vaccines for the second dose. He has thereby instructed the health officials to make proper arrangements to roll out AstraZeneca vaccine’s second dose to all those who have received it as the first dose.

The World Health Organization (WHO) has recommended that a person who has received the first dose of AstraZeneca vaccine can receive the second dose within a period up to 45 weeks, said Specialist Dr. Prasanna Gunasena, member of the Special Committee on COVID-19 Control.

The commencement of vaccination drive at the hospitals from last Monday has paved the way to provide COVID-19 vaccines to a large number of people in a short period of time, the PMD stated further, adding that steps have been taken to continue the method throughout the island.