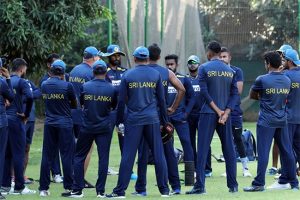 Sri Lanka and India are due to battle 3-match ODI series and 3-match T20I series from July 13 to July 25 at the R. Premadasa International Cricket Stadium, Colombo.

The long-drawn-out tussle between the national players and the SLC over the annual contracts was to be resolved after the England tour, however, it still remains a major issue.

They initially refused to sign both annual and tour contracts until the pay dispute is resolved, citing lack of transparency of the rating system devised by the cricket board. However, the players later agreed to sign the tour declaration ahead of the England series.

They stated that the ratings system used for gradation lacks clarity and that the compensation they are offered is inadequate.

Sri Lanka Cricket, in May, had announced a five-point grading system to offer retainer packages for its contracted cricketers including the parameters of Performance (out of 50), Fitness (out of 20), Leadership (out of 10), Professionalism (out of 10) and Future Potential and Adaptability (out of 10) for a score out of 10.

Players were slotted into four grades A, B, C, D with each grade further divided into three sub-categories bearing different retainer values.

Under the proposed pay structure, former captain Angelo Mathews and current Test captain Dimuth Karunaratne suffered the biggest cuts. Mathews’ annual fee fell from $130,000 a year to $80,000 while Karunaratne was offered $70,000, a drop of $30,000. All-rounder Dhananjaya de Silva and wicket-keeper Niroshan Dikwella were offered the highest remuneration of $100,000 each.

When the new pay plan was unveiled last month, players said it was “non-transparent” and urged Sri Lanka Cricket to not hold them at gunpoint.

Players were also anguished that their proposed salaries were disclosed to the public by the board, in violation of confidentiality.

Prior to the England tour, the players defied a deadline of June 3 to sign the contract, as they decided to stick to their stand.