Sri Lanka’s Prime Minister Mahinda Rajapaksa says that China has been a ‘historical friend’ and, based on the long-standing cooperation between the two nations, it must be acknowledged that China is one of Sri Lanka’s most sincere friends. 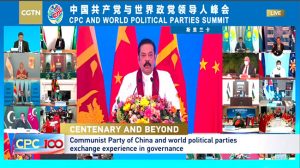 He made these comments while addressing the virtual conference commemorating the 100th anniversary of the Communist Party of China (CPC) on Wednesday.

“I am aware that it was the foreign policy positions of the CPC that elevated China on the global stage. However, China has never tried to impose its own political views on the world,” Rajapaksa said.

“China has also never felt the need to manipulate the affairs of other countries. China has helped the other countries, keeping them at the same level, which is a very important matter for a country’s independence as well as its sovereignty.”

Therefore, countries never hesitated to deal with China, because they were allowed to maintain their independence, he stated. “It is the same for Sri Lanka. That is why most doors of the world were opened to China.”

He stated that this policy is very important for the progress of China, internationally and that it has now become clear that China will lead the rise of Asia in the century ahead.

The Prime Minister said that dividing of the world into two camps is not important anymore. China did a historic service to relieve Asian and African countries from the hardships faced due to this division, he said.

“It was China that helped the world, which was facing difficulties due to the division of the world into two camps. At that time, Zhou Enlai brought the idea of non-aligned nations to the world, for world relief. That non-aligned policy is still a relief to the world today.”

“The Belt and Road Initiative is the present policy of China, which is not something alien to us,” he said.

Rajapaksa stated that during ancient times, Sri Lanka was located at a point on the Silk Road connected with China and that like the Buddhist monk Fa-Hien Thero, many merchants and business people had dealings with Sri Lanka while they were traveling to and from China.

He added: “China is traveling along this Silk Road today with many lessors for the world. The open economy has spread throughout the world, changing the very structure of many countries. However, China accepted the world reality of the open economy in a way that was suitable to China. Therefore, China did not accept the open economy as something that divides the country into classes and weakens the country. Instead, China has successfully eradicated poverty of 900 million people under its open economic policy and set a great example to the world by the way it adopted the open economy. I am confident that, China will bring back the economic strength that Asia had five hundred years ago through this Silk Road.”

The prime minister stated that China always believed that improving infrastructure will provide new ways and new strengths for the people. “Therefore, we have constantly invited China to help develop the infrastructure of our country.”