The 1,275 new cases announced on Thursday marked the second straight day above 1,200 and exceeded the previous one-day record of 1,240 set at the peak of the country’s third wave in December.

More than 1,000 of the infections were in the greater Seoul area, which is home to half of South Korea’s 51 million people.

The government warned on Wednesday that it was considering raising movement restrictions to the highest level as the fourth wave was spreading rapidly, especially among unvaccinated people in their 20s and 30s.

The rise of the Delta variant has also worried health officials.

Current social distancing rules in Seoul include a ban on private gatherings of five or more people and a 10pm (13:00 GMT) curfew on restaurants, according to the Yonhap news agency. The curbs will be reviewed next week.

Just 10 percent of the country’s population of 52 million people have been fully vaccinated, while 30 percent have received at least one shot, the majority of them people over the age of 60. 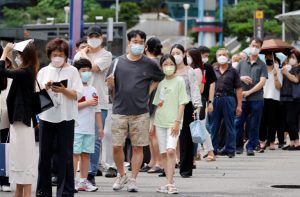