A discussion was held this morning, chaired by Justice Minister Ali Sabry, with regard to seeking compensation for the damage caused by the fire onboard the ‘X-Press Pearl’ containership. 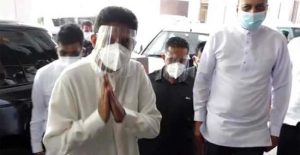 The discussion focused on Sri Lanka seeking compensation from the operator of the ill-fated feeder for the environmental damages caused by the ship’s sinking.

Meanwhile State Minister Kanchana Wijesekara says that compensation for fishermen effected by X-Press Pearl disaster will be deposited to their bank accounts from today (12).

He said that Rs 420 million will be utilized from the interim claim received and that beneficiaries will be verified by Officials of Fisheries Dept., Divisional Secretariats and Fishing Associations.

The chemical-laden feeder containership X-Press Pearl sank on June 2 and touched the sea bottom off Colombo Port in Sri Lanka after burning for almost two weeks.

The ship’s cargo poses a major threat of environmental pollution to the area, as the vessel was carrying 1,486 containers with 25 tons of Nitric Acid, several other chemicals, and cosmetics.

As reported previously, a considerable number of pallets with chemicals have ended up in the sea causing massive damage to the marine environment in the area.