At least 52 people have been killed in a fire at the coronavirus isolation ward of a hospital in Iraq, the second such deadly blaze in a COVID-19 unit in three months. 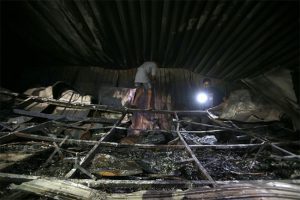 The fire broke out at the Al-Hussein hospital in the southern city of Nasiriya late on Monday and was brought under control by civil defence teams.

A medical source with the health directorate told AFP news agency the “main reason behind the fire… was the explosion of oxygen tanks”.

Haydar al-Zamili, the local health authority’s spokesperson, said early on Tuesday that 52 bodies had been retrieved while 22 people had been hurt after the fire had “ripped through the Covid isolation ward”.

“The victims died of burns and the search is continuing,” he added, noting that there were fears people could still be trapped inside the building.

Health sources told Reuters news agency the death toll could rise as many patients were still missing. Two health workers were among the dead, they said.

Health officials at Nasiriya said search operations at the hospital were continuing, but that thick smoke was making it difficult to enter some of the burnt-out wards.

“Many people have taken to the streets in Nasiriya and in front of the hospital,” said Abdelwahed, who said that the manager of the hospital had resigned.

“Corrupt officials must be held accountable for the fire and killing innocent patients. Where is my father’s body,” said one young man as he searched among charred bodies wrapped in blankets in the hospital’s courtyard.

Iraqi Prime Minister Mustafa al-Kadhimi also declared a state of emergency in the governorate of Dhi Qar, where Nasiriya is located, Abdelwahed reported.

In a tweet, al-Kadhimi said that his office was holding an emergency meeting to discuss “the causes and repercussions” of the incident.

Earlier on Monday, a minor fire broke out at the health ministry’s headquarters in Baghdad, but it was quickly contained and no fatalities were recorded.

The blaze at the Nasiriya hospital is the second such tragedy this year.

In April, a fire at a Baghdad COVID-19 hospital sparked by the explosion of badly stored oxygen cylinders killed 82 people and injured 110 others.

Many of the victims were on respirators being treated for COVID-19 and were burned or suffocated in the resulting inferno that spread rapidly through the hospital, where dozens of relatives were visiting patients in the intensive care unit.