Former Prime Minister Ranil Wickremesinghe says that Sri Lanka is now in the middle of a major foreign exchange crisis and warned of “hunger and massive unemployment” in the country by the middle of next year if the government does not take necessary action. 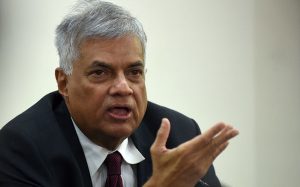 “Our reserves amount to USD 4 billion. Once we settle the bond issues mid-year we’ll be left by another billion US dollars. So, we will be roundabout USD 3 billion dollars.”

“The unpaid dollar bills of the Ceylon Petroleum Corporation (CPC) amounts to USD 1.3 billion,” the UNP leader said, issuing a special statement on Wednesday (14) regarding the current economic situation facing the country.

“There is a foreign exchange crisis in the banks, there are no dollars as you know. The banks are in debt to foreign banks. The amounts have not been disclosed by the Central Bank, but I am told it comes to around USD 3 billion.”

He stated that these two debts alone come to USD 4.3 billion and that Sri Lanka currently has in in its reserves about USD 3 billion of which another over a billion US dollars will be utilized to service the bonds and to settle the bonds end of the year.

“What are we left with? This is the major foreign exchange crisis we have. No imports are allowed. Parents can’t pay the fees of their children studying abroad. Similarly, we cannot bring in fertilizer.”

“This whole organic fertilizer is just a cover for the government’s bankruptcy,” Wickremesinghe charged.

“There is an oil tanker in the port and we can’t find the dollars to pay the oil tanker. We have limited money that’s why all the vaccines we have are limited to those over the age of 30. Others do not have any vaccines.”

The UNP MP said Sri Lanka is facing a serious situation. “No one has given us money. The IMF has decided to issue USD 650 billion to be divided among the 190 member nations. Under that we will receive USD 800 million. But that is not enough.”

Wickremesinghe said that cannot cover everything and that since there is no other alternative Sri Lanka must go to the IMF and negotiate with the IMF that we have sufficient money for the next two years.

“Similarly, the IMF certificate will enable us to get more from India, China, Japan and the other countries. If we do not do this there will be hunger and massive unemployment somewhere in the middle of next year.”

The former Prime Minister said that the control of public finance lies in parliament and therefore they will be asking for a full debate in parliament for the government to explain how they are going to overcome this crisis.

“We all must be aware of this situation and force the government to take some positive steps.”