The Ambassador of Vietnam in Colombo, Ho Thi Thanh Truc has paid a courtesy call on State Minister of Regional Cooperation Tharaka Balasuriya at the Foreign Ministry premises on Tuesday (July 13). 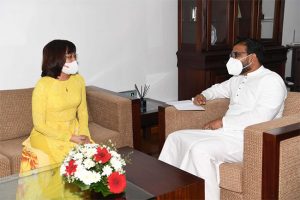 While reiterating the long-standing bilateral relations between the two countries, State Minister Balasuriya noted that the main focus of the Sri Lankan government is on economic development, tourism and building trade ties with countries in the Southeast Asia region, the Foreign Affairs Ministry said in a statement.

During the meeting, Ambassador Truc explained the steps taken by the Vietnam’s government to introduce the organic farming in Vietnam and expressed willingness to share those experiences with Sri Lanka. Currently, MoU on Agricultural Development Cooperation between two countries are in full swing, the ministry said further.

Further, State Minister Balasuriya has explored the possibility of furthering ties in the IT sector of Sri Lanka and Vietnam and agreed to give a road show in Colombo Port City where Vietnam investors would get the opportunity to invest in areas such as IT and Software.

Explaining the possibility of increasing the tourist arrivals from Vietnam, State Minister Balasuriya highlighted that programmes on Sri Lanka tourism in Vietnam language, to be aired in social media can be facilitated to attract tourists from Vietnam. As a response, the Vietnam Ambassador Truc highlighted the importance of establishing direct air connectivity between Sri Lanka and Vietnam to encourage the tourism.

The Meeting has been associated by officials from the Foreign Affairs Ministry and Vietnam Embassy in Colombo.