The case filed against five suspects, including the captain of the ‘X-Press Pearl’, regarding the fire which occurred on the said vessel was taken up in the Colombo High Court today (July 15). 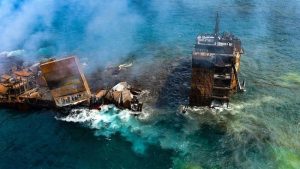 When the case was taken up, the Deputy Solicitor General had stated that court no orders are expected regarding the investigations today.

Deputy Solicitor General Madhava Tennakoon who appeared on behalf of the Attorney General said that further investigations are being carried out into the incident.

The court also directed the Criminal Investigation Department (CID) to report on the progress of the relevant investigations on the next court day.

The captain of the ill-fated ship, the chairman and three members of the board of directors of the local agency who were named as suspects in the case appeared in court today.

The judge ordered them to appear before the court at the next hearing.