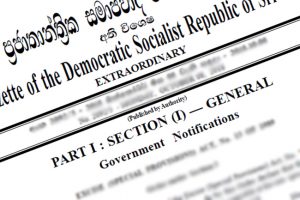 Secretary to the President, P.B. Jayasundera has issued a Gazette Extraordinary, amending the portfolios of three state ministries.

The amendments are effective from the 8th of July, the gazette notification read further.

They took oaths before the President in their reshuffled state ministerial portfolios last week.