President Gotabaya Rajapaksa says existing obstacles in the University Grants Commission (UGC) Act will be eliminated and the Kotelawala Defence University (KDU) too will be brought under its purview. 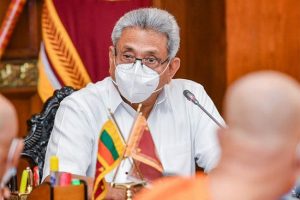 This remark came during the 11th meeting with the Buddhist Advisory Council held at the Presidential Secretariat, on Friday (July 16), the President’s Media Division (PMD) said in a statement.

The President has briefed the Maha Sangha on the measures taken by the government to control the spread of COVID-19 including its vaccination drive, and the Kotelawala Defence University Bill.

The President expressed confidence that all vaccines received since the arrival of the first batch of AstraZeneca jabs on January 28, and the district-level vaccination programmes implemented across the country will pave the way to complete the administration of recommended doses for people who are over the age of 30 before end of August.

It is also expected to complete the vaccination drive in the Kandy District before the Kandy Esala Perahera. The President pointed out that the World Health Organization (WHO) has commended the vaccination process in Sri Lanka and Sri Lanka has become one of the leading countries in South Asia in vaccination.

President Rajapaksa noted that the unconstructive opposition of certain groups to policy decisions taken for the benefit of the future of the country is a grave injustice to our future generations.

He pointed out the need to establish such high-quality universities in the country in order to save the large amount of money lost to the country and to the parents when sending their children abroad for higher education.

He added that the obstacles existed in the University Grants Commission Act will be removed and the Kotelawala Defence University will be brought under its purview.

The Maha Sangha has commended the President and the government for their efforts to control the COVID-19 from the outset and pointed out the need to educate the public about the objectives of the Kotelawala Defence University and to take steps to prevent the spread of misconceptions in the society regarding this University.

Members of the Buddhist Advisory Council, Principal Advisor to President Lalith Weeratunga, Secretaries to the Ministries and Government Officials attended the meeting.