The Motion of No Confidence brought against Energy Minister Udaya Gammanpila by the opposition has been defeated by a majority of 91 votes. 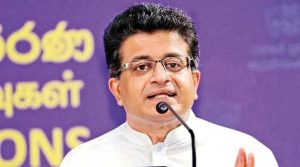 A total of 61 MPs had voted in favour of the motion while 152 parliamentarians voted against it.

Members of the Samagi Jana Balawegaya (SJB), the Tamil National Alliance (TNA) and the Janatha Vimukthi Peramuna (JVP) voted in favour of the motion while members of the ruling party, Sri Lanka Podujana Peramuna (SLPP), and the Sri Lanka Freedom Party (SLFP) cast their vote against.

Parliament was subsequently adjourned until August 03, 2021.

The motion also cites the recent statement issued by the General Secretary of the ruling party, Sri Lanka Podujana Peramuna (SLPP) regarding the fuel price hike.

The no-confidence motion against Minister Gammanpila was handed over to the Speaker of the Parliament Mahinda Yapa Abeywardena on June 22.

It was taken up for debate yesterday and today, followed by a vote on the motion at 5.30 p.m. this evening.

Meanwhile former Prime Minister Ranil Wickremesinghe’s proposed amendment to the no-confidence motion was deemed not acceptable by the Speaker today.

Speaker of Parliament ruled that the proposed amendment to the No-Confidence Motion against the Minister of Energy, handed over to the Secretary-General of Parliament by MP Ranil Wickremesinghe is out of order, and cannot be accepted.

Speaker Mahinda Yapa Abeywardena informed of this to the parliament this morning (July 20) when the debate on the no-confidence motion resumed for the second day.

The no-confidence motion filed by the Samagi Jana Balawegaya (SJB) against Energy Minister Udaya Gammanpila over the recent hike of fuel prices commenced in the parliament yesterday (July 19).

When the case of no-confidence motion was tabled at the parliament yesterday, former Premier Ranil Wickremesinghe proposed to amend the motion against all ministers of the government instead of just the Energy Minister.

However, as SJB objected to this proposition, the no-confidence motion was taken into debate.