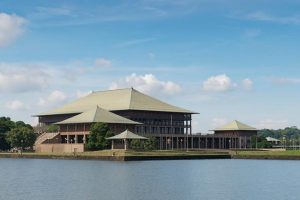 Sri Lanka’s first floating solar power plant is planned to be built in Diyawanna Lake with the assistance of a loan from the Government of India.

The floating solar power plant, which is proposed to be constructed to meet the daily electricity requirement of the Parliament premises, has a capacity of 1.5 MW.

The Minister further stated that the construction of the power plant will be expedited and the Parliament will set a precedent for the entire country regarding the concept of floating solar power plants.