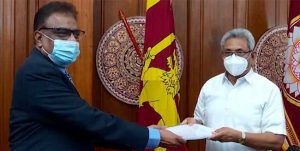 The interim report of the Presidential Commission of Inquiry appointed to probe human rights violations has been handed over to President Gotabaya Rajapaksa.

The Commission was appointed by the President to investigate, inquire into and report or take necessary actions on findings of preceding Commissions or Committees appointed to investigate into human rights violations, serious violations of International Humanitarian Law (IHL), and other such offenses.

The Commission handed over the relevant interim report yesterday (July 20), according to President’s Media Division.

In its interim report, the Commission has stated that it does not agree with the view that the Prevention of Terrorism Act (PTA) should be repealed and that the law should be amended after studying the laws introduced to prevent terrorism in other countries, including the United Kingdom.

Three proposals have been made to implement the PTA in a more democratic manner, focusing on Sections 9, 11, and 13 of the Act.