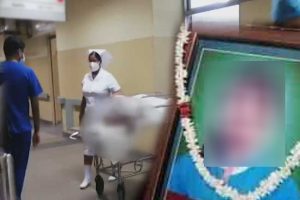 Former JVP MP Dr. Nalinda Jayatissa has raised concerns about the investigations into the death of 16-year-old, who died of burn injuries recently while working as a domestic helper at the private residence of MP Rishad Bathiudeen.

Accusing that the probes are slow-paced, Dr. Jayatissa urged the law enforcement authorities to expedite delivering justice to the deceased.

According to the police spokesman, two teams consisting of the officers of Divisional Crime Detective Bureau and Divisional Children & Women Bureau of Colombo South have been deployed to record statements and to collect circumstantial evidence on the matter.

As the girl’s family had lived in the area of Kiriwandala in Puwakpitiya prior to moving to Dayagama, the investigating officers yesterday (July 20) recorded statements from four persons in the area including the principal and vice principal of Kiriwandala Tamil School where the girl had studied for a while.

They are planning to record additional statements from the girl’s mother and other relevant parties in Dayagama area today, SDIG Rohana added.

Meanwhile, the Borella Police has seized the mobile phone of the male domestic worker at the parliamentarian’s residence. It has been handed over to the Criminal Investigation Department to uncover missing files or data.

The police spokesman stressed that further probes will be conducted in order to ascertain the offences committed in violation of the Penal Code and other laws.