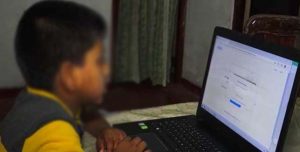 The strike initiated by the teacher-principal trade unions is continuing for the tenth consecutive day today (July 21).

They withdrew from conducting online lessons on July 12, demanding solutions for anomalies in salaries, ‘forced quarantining’ protesters, and several other issues.

A total of 17 trade unions representing school principals and teachers including the Ceylon Independent Teachers’ Services Union (ITSU) had joined the said strike.

The Secretary of Ceylon Teachers’ Union (CTU), Joseph Stalin, who addressed a media briefing this morning, stated that they would carry on the trade union action until their demands are met.

However, Minister Bandula Gunawardena, speaking on the matter, responded that salaries cannot be increased right away, as requested by the trade unions.

In the meantime, a discussion held between Education Minister Prof. G.L. Peiris and the teacher-principal trade unions yesterday ended without reaching an agreement.