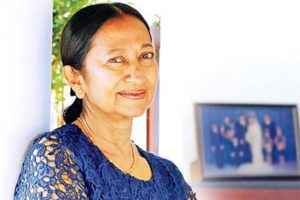 The police stated that the van she was travelling in had fallen down a precipice at Lindula in Thalawakele.

Reportedly, Wijeratne, who was in Nuwara-Eliya for filming a teledrama, had been on her way back to Colombo at the time of the accident.

Lindula Police has arrested the driver of the van over the accident.

Wijeratne was 75 years of age at the time of her demise.

She was acclaimed for her performances in Bithu Sithuwam, Karumakkarayo, Ho Gaana Pokuna and Tharaka Mal.