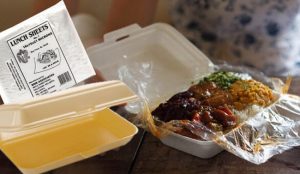 Sri Lanka’s ban on all types of non-degradable lunch sheets will be implemented from today (August 01) onwards.

The Government of Sri Lanka imposed a ban on the manufacturing, distribution, sale, or use of non-degradable lunch sheets.

Previously, a grace period of a month was granted to sell the lunch sheets that had already been manufactured. However, the manufacturing and distribution of polythene lunch sheets were completely forbidden during that period.

The Ministry of Environment stated that the Central Environmental Authority and the Consumer Affairs Authority have launched special operations to find out whether non-degradable lunch sheets are still in production.

The ministry further stated that the law will be strictly enforced against anyone who manufactures and distributes them in defiance of these orders.

It has been estimated that Sri Lanka releases over 10 million lunch sheets into the environment per day.