More individuals have been arrested by Talangama Police and Cinnamon Gardens Police in connection with the protest campaigns held within the last three days, says Senior DIG Ajith Rohana. 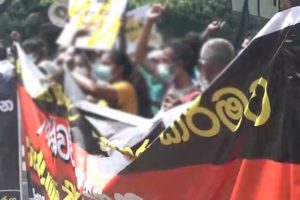 According to the police spokesman, five of the suspects were taken into custody over the demonstration carried out near the entry road to Parliament on August 03 during which the OIC of Maharagama Police sustained critically injured.

The officers of Talangala Police had made the arrests on Thursday (Aug. 05).

Among the arrestees are the president of Sri Jayewardenepura University’s student association, the convener of Inter University Students’ Federation (IUSF) and three drivers who transported the protesters from Medirigiriya, Peradeniya and Tissamaharama in violation of interprovincial travel restrictions.

They will be produced before Kaduwela Magistrate’s Court later today, the police spokesman added.

In addition, the Cinnamon Gardens Police arrested three individuals over a protest campaign at Soyza Roundabout in Colombo.

These arrestees are to be produced before Magistrate’s Court in Hulftsdorp.