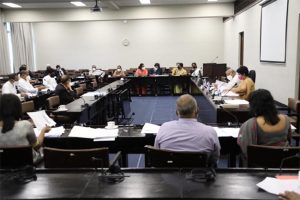 The Women Parliamentarians’ Caucus has proposed the Select Committee of Parliament to identify appropriate reforms of the election laws and the electoral system as well as to recommend necessary amendment that 50% of the national list should be for women.

Speaking on behalf of the Women Parliamentarians’ Caucus, its chairperson, State Minister Dr. Sudarshani Fernandopulle pointed out that the representation of women in Parliament, Provincial Councils and Local Government Authorities should be increased to 30%. She also suggested that the representation of women in State Boards and Commissions should be increased to 33%.

State Minister Fernandopulle also pointed out the need to implement the same law for all elections. “Candidacy for women is also an issue nowadays. There must also be a change in society’s attitude towards women.” Stressing that the current proportional representation system is not so favorable to women, she emphasized that political violence in the country has also reduced the representation of women in politics.

The Committee also discussed the issue of women not being given high positions in political parties.

The Leader of the House, Minister Dinesh Gunawardena added that there was more room for women’s representation in the local authority election system as well as in the previously proposed Provincial Council election system.

Minister Nimal Siripala de Silva told the committee that women could not be given more opportunities in politics without abolishing the existing preferential system in the country. The minister also pointed out that an in-depth study should be carried out on the methodology of appointing members from the National List.

MP Anura Kumara Dissanayake pointed out that a methodology should be formulated to determine the number of female candidates contesting the elections.

Addressing the committee meeting, Ven. Athuraliye Rathana Thero stated that women have great organizational strength from the village level and that the non-politicization of women is a cultural issue.

MP Ranjith Maddumabandara told the committee that civil society organizations could play a major role in raising awareness on the need to increase the representation of women in politics.

In the meantime, Head of the Women’s Political Academy Attorney-at-Law Nimalka Fernando, stated that it is essential to maintain the current 25% quota in the local authority election system.

She went on to suggest that political parties should work towards providing leadership training to women and that women’s representation in Parliament and Provincial Councils should be increased to 30%. She stressed that a new system should be set up so that women get 30% of the national list.

Speaking at the committee, ‘WILL Club’ said that a new system should be set up so that those working in the private sector can also use postal voting.

Addressing the committee, the ‘Yeheliya Foundation’ said that new reforms should focus on reducing election expenses and that a guideline should be prepared for the media involved in election reporting.

Eksath Social Services Women Society – Gangodawila, testified before the Committee that it is essential for all candidates to pass the GCE Ordinary Level Examination.

Five women’s organizations presented their proposals at this committee meeting.

The next meeting of the Committee is scheduled to be held on August 11.

Officials from the Election Commission and the Attorney General’s Department also attended the meeting.