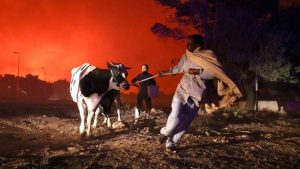 Thousands of tourists and residents have been evacuated from towns north of the Greek capital, Athens, as wildfires spread across the country.

Strong winds and high temperatures are making it difficult to control the blazes, which have killed at least two people, including a firefighter.

Huge clouds of smoke and ash near Athens has meant some people there have also been urged to leave their homes.

More than 150 fires have been reported. Six areas have been put on high alert.

Greece, like many parts of Europe, has been grappling with extreme weather this summer. Prime Minister Kyriakos Mitsotakis said the fires showed “the reality of climate change”.

Hundreds of firefighters are trying to control the fires with about 20 water-bombing aircraft. Extra firefighters and planes are being sent in from countries including the UK, France and the US.

The UK government said Home Secretary Priti Patel was sending “experienced firefighters” after witnessing the “devastating effect” of the fires while in Greece earlier this week.

Fanned by unpredictable winds, the worst blazes are around the north of Athens. A 38-year-old volunteer firefighter was killed by a falling electricity pole in a suburb of the city.

The other victim was the president of the Athens Chamber of Commerce, Konstantinos Michalos. He was found unconscious in a factory close to where a fire was raging.

A further 20 people have been injured.

The fires are expected to continue to burn and spread on Saturday, despite a drop in temperatures to around 35C (95F) from above 40C earlier this week.

Thousands of people were earlier ordered to leave their homes outside Athens as the blaze tore through houses, cars and businesses.

Fires have also been raging on the nearby island of Evia, and areas close to ancient Olympia, the birthplace of the Olympic Games.

“Wildfires of unprecedented intensity and spread, all our forces are fighting the battle day and night to save lives, together with volunteers,” he said.

Hundreds of residents and tourists on Evia have been evacuated using ferries and fishing boats, as wildfires closed in on its shores.

“We’re talking about the apocalypse, I don’t know how to describe it,” Sotiris Danikas, a coastguard official on the island, told broadcaster ERT.

In neighbouring Turkey, authorities are battling the country’s worst-ever wildfires.

Eight people have been killed and tens of thousands evacuated along the southern coast. Six more neighbourhoods near a power station were evacuated on Friday.

Climate change increases the risk of the hot, dry weather that is likely to fuel wildfires.

The world has already warmed by about 1.2C since the industrial era began and temperatures will keep rising unless governments around the world make steep cuts to emissions.