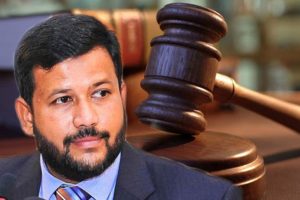 The court has ordered to remand MP Rishad Bathiudeen until the conclusion of the case file against him.

He was produced before the Fort Magistrate earlier today (August 10).

The parliamentarian and his brother were arrested on April 24 for allegedly aiding and abetting the suicide bombers who perpetrated the deadly terror attacks on April 21, 2019.

The former minister was taken into custody at his residence in Bauddhaloka Mawatha in Colombo while his brother Riyaj Bathiudeen was apprehended in Wellawatte area.

They were initially interrogated under a 72-hour detention order obtained by the CID under the provisions of Article 6(1) of the Prevention of Terrorism Act (PTA).

However, a subsequent 90-day detention order was obtained pursuant to Article 9(1) of the PTA as the two arrestees need to be interrogated further. – ada derana