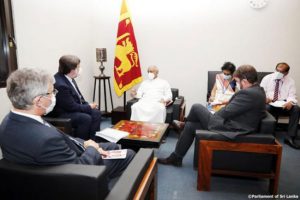 The COP26 Regional Ambassador for the Asia-Pacific and South Asia Ken O’Flaherty congratulated Sri Lanka for timely submission of its updated Nationally Determined Contributions (NDCs) with ambitious commitments on renewable energy and net zero carbon, as well as a pledge for “no more coal.”

He reiterated that the commitment at the highest level of policy making is the strength behind such ambitious commitments and it would no doubt bring wide accolades to Sri Lanka. Ambassador O’Flaherty also stated that there are a wide range of opportunities for countries when they submit NDCs with clear ambitious targets, not only for climate financing grants, but also for attracting foreign investors who are increasingly focusing on countries with clear de-carbonizing mechanisms in their policies.

He reiterated that overall Net Zero Carbon by 2050 is an important target accepted by an increasing number of countries.

Ambassador Ken O’ Flaherty made these comments when he called on Foreign Minister Dinesh Gunawardena at the Parliament. COP26 Regional Ambassador for Asia-Pacific Ken O’ Flaherty visited Sri Lanka from 5th – 9th August 2021. The visit was organized by the High Commission of UK in Colombo in liaise with the Foreign Ministry and the Ministry of Environment of Sri Lanka.

Sri Lanka’s progressive initiatives to mitigate climate change impacts, including President Gotabaya Rajapaksa’s initiative “Towards a Green Socio-Economic Pattern with Sustainable Solutions to Climate Change,” Sri Lanka’s engagement with the Commonwealth Blue Charter by championing the Action Group on Mangrove Ecosystems and Livelihoods (MELAG) as well as actively participating in eight other Action Groups within the Blue Charter covering other areas, and the Mangrove Caretaker Programme launched with the British High Commission in Colombo were highlighted by Foreign Minister Dinesh Gunawardena during the discussion.

The Foreign Minister also extended an invitation to COP26 Presidency Rt. Alok Sharma to visit Sri Lanka. He also thanked the Government of UK for assistance being offered to Sri Lanka through the Blue Planet Fund’s Ocean Country Partnership Programme. The 26th Conference of the Parties (COP26) under the United Nations Framework Convention on Climate Change (UNFCCC) is due to take place in November 2021 in Glasgow, Scotland and the United Kingdom holds the COP26 Presidency.

During the discussions, the importance of the visit amidst global challenges due to COVID-19 and the gesture of goodwill by the British government in being the first country to come forward with specific assistance when the MV Pearl X-Press vessel disaster happened on 20th May 2021, was also appreciated by the Sri Lankan side.

The importance of bringing nitrogen waste into the climate change discourse was reiterated by the Sri Lankan side, in the context of the direct global warming potential (mass basis) of the greenhouse gas Nitrous Oxide (N2O) and Sri Lanka’s initiatives through the Colombo Declaration on Sustainable Nitrogen Management which seeks to halve nitrogen waste by 2030 and the UK’s own initiative on Nitrogen4NetZero. The importance of forging collaboration between the UK and Sri Lanka was reiterated during the discussion.

During the visit, Ambassador O’Flaherty had extensive discussions with Minister of Environment Mahinda Amaraweera and senior officials, followed by a technical level working meeting chaired by Secretary of the Ministry of Environment Dr. Anil Jasinghe. The visiting Ambassador O’Flaherty also called on State Minister of Regional Cooperation Tharaka Balasuriya and Foreign Secretary Admiral Prof. Jayanath Colombage. The visit concluded with the planting of a Golden Shower Tree, Cassia fistula at the Beddagana Wetland Park managed by the Urban Development Authority. This Wetland Park is also connected to the “Darwin Initiative”, a wetland conservation project funded by the British High Commission in Colombo and the International Water Management institute.