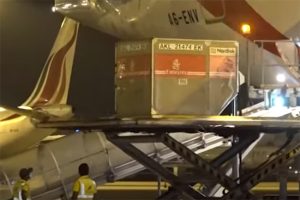 A consignment of 15,000 doses of Russia-manufactured Sputnik V vaccines has arrived in Sri Lanka this morning (August 11).

According to Ada Derana reporter, the vaccine shipment, airfreighted from Russia, reached the Bandaranaike International Airport (BIA) in Katunayake in a special flight chartered by the Emirates.

The newly-received jabs have been transported to the central vaccine storage complex at the State Pharmaceuticals Corporation (SPC).

On March 04, Sri Lanka’s National Medical Regulatory Authority approved the emergency use of Sputnik V COVID-19 vaccine. It has been approved by a total of 69 countries.

The vaccine was initially met with controversy for being rolled out before the release of final trial data. However, last stage trial results published in Lancelet medical journal in February revealed that it provides 91.6% protection against SARS-CoV-2.

According to Russian Direct Investment Fund (RDIF), the vaccine’s efficacy is 97.6%, based on the analysis of data from 3.8 million Russians vaccinated with both vaccine components between December 5, 2020 and March 31, 2021.

The Sputnik V vaccine can be stored at temperatures of between 2 and 8C degrees (a standard fridge is roughly 3-5C degrees).

Two doses are required to be taken 21 days apart in order for the vaccine to be effective.

Unlike other similar vaccines like Pfizer-BioNTech and Oxford-AstraZeneca, the Sputnik jab uses two slightly different versions of the vaccine for the first and second dose. Although both doses target the coronavirus’s distinctive ‘spike’, each dose in Sputnik V contains a slightly different vector – the neutralised virus that carries the spike to the body. – ada derana