The Taliban has declared the war in Afghanistan is over after insurgents took control of the presidential palace in Kabul as US-led forces departed and Western nations scrambled to evacuate their citizens. 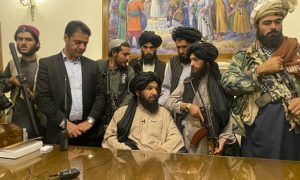 Spokesman Mohammad Naeem said in interviews with Al Jazeera TV the Taliban did not want to live in isolation. He said the group respected women’s and minorities’ rights and freedom of expression within Sharia law.

“Today is a great day for the Afghan people and the mujahideen. They have witnessed the fruits of their efforts and their sacrifices for 20 years,” he said. “Thanks to God, the war is over in the country.”

Naeem said the Taliban wanted to have peaceful relations with foreign countries. “We ask all countries and entities to sit with us to settle any issues”, he said.

The comments came hours after several key events on Sunday, including Taliban insurgents entering, President Ashraf Ghani leaving Afghanistan saying he wanted to avoid bloodshed and America abandoning its embassy in panic. The swift arrival brings the Islamist militants close to taking over the country two decades after they were overthrown by a US-led invasion.

By Monday morning a US official said the majority of Western diplomatic staff had left Kabul and that the airport perimeter had been secured.

Even the militants themselves were surprised by the speed of the takeover, co-founder Mullah Abdul Ghani Baradar admitted in a video statement in the evening. Now the group faces the challenge of ruling, he added. They are expected to proclaim a new Islamic Emirate of Afghanistan soon.

Suhail Shaheen, a Taliban spokesman and negotiator, told the Associated Press on Sunday that the militants would hold talks in the coming days aimed at forming an “open, inclusive Islamic government.”

But many Afghans fear the Taliban will return to past harsh practices in their imposition of sharia, or Islamic religious law. During their 1996-2001 rule, women could not work and punishments such as stoning, whipping and hanging were administered.

On Sunday the airport was mobbed with thousands of people desperate to escape. In the evening they flooded on to the runway, halting all air traffic. Hundreds of Afghans waited for flights, some dragging luggage across runways in the dark, while women and children slept near security corridors. A source at the airport said some scuffles broke out among people unable to get a place as departures were halted.

Massouma Tajik, a 22-year-old data analyst, was among hundreds of Afghans waiting anxiously in the Kabul airport to board an evacuation flight.

“I see people crying, they are not sure whether their flight will happen or not. Neither am I,” she said by phone, with panic in her voice.

The US admitted it was not in complete control of the airport.

“We are completing a series of steps to secure the Hamid Karzai International Airport to enable the safe departure of US and allied personnel,” the Pentagon and State Department said in a joint statement early on Monday.

The United States released a statement with more than 65 nations urging the Taliban to let Afghans leave the country, warning of accountability for any abuses.

“The United States joins the international community in affirming that Afghans and international citizens who wish to depart must be allowed to do so,” Secretary of State Antony Blinken wrote on Twitter.

“Those in positions of power and authority across Afghanistan bear responsibility – and accountability – for the protection of human life.”

In deeply humiliating scenes for the Biden administration, less than a month before the 20th anniversary of the 9/11 attacks on America, smoke spiralled from the embassy compound as staff hastily destroyed documents, before a final group took down the stars and stripes flag and headed to the airport by military helicopter.

In Washington, opponents of President Joe Biden’s decision to end America’s longest war said the chaos was caused by a failure of leadership.

Naeem said that no diplomatic body or headquarters was targeted in the Taliban’s approach and the group would provide safety for citizens and diplomatic missions. Ghani’s escape was unexpected and “even those close to him did not expect it,” Naeem said.

“We are ready to have a dialogue with all Afghan figures and will guarantee them the necessary protection,” he told Al Jazeera Mubasher TV.

“We have reached what we were seeking, which is the freedom of our country and the independence of our people,” he said. “We will not allow anyone to use our lands to target anyone, and we do not want to harm others.”

“We do not think that foreign forces will repeat their failed experience in Afghanistan once again.”

Afghans with no option to leave had raced home when they realised the Taliban were arriving to destroy evidence of western or government links. Women without burqas searched for shops where they could buy them. Even hospitals were closed, with at least one desperate woman forced to give birth at home, with a doctor she begged to attend.

At the same time, foreign forces scrambled to leave. Many people watched in disbelief as helicopters landed in the US Embassy compound to take diplomats to a new outpost at the airport.

A US State Department spokesperson said early on Monday that almost all embassy personnel, including Ambassador Ross Wilson, were at the airport and the American flag had been lowered and removed from the embassy compound. US Secretary of State Antony Blinken rejected comparisons to the US pullout from Vietnam.”This is manifestly not Saigon,” he said on ABC’s This Week.

As the insurgents closed in, President Ashraf Ghani flew out of the country.
“The former president of Afghanistan left Afghanistan, leaving the country in this difficult situation,” said Abdullah Abdullah, the head of the Afghan National Reconciliation Council and a longtime rival of Ghani. “God should hold him accountable.”

Ghani later posted on Facebook that he left to avert bloodshed in the capital, without saying where he had gone.

As night fell, Taliban fighters deployed across Kabul, taking over abandoned police posts and pledging to maintain law and order during the transition. Residents reported looting in parts of the city, including in the upscale diplomatic district, and messages circulating on social media advised people to stay inside and lock their gates.

Local television 1TV reported that multiple explosions were heard in the capital after dark. Aid group Emergency said 80 wounded people had been brought to its hospital in Kabul, which was at capacity, and that it was only admitting people with life-threatening injuries.

UN Secretary General Antonio Guterres urged the Taliban and all parties to “exercise restraint” and said the rights of women and girls, who suffered under the previous Taliban regime, must be protected.

The UN also said the Security Council would meet over Afghanistan on Monday.