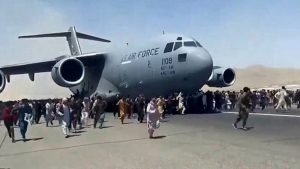 Afghanistan’s international airport has been overrun by desperate Afghans seeking to escape Taliban rule, leading to several deaths, after the Islamist militants took over Kabul.

US forces at the Hamid Karzai International Airport had responded to “hostile threats that resulted in the death of two armed individuals”, John Kirby, a Pentagon spokesman, told reporters.

A foreign official monitoring evacuation flights from the city said US marines had fired shots, while other Afghans fell to their deaths after clinging to the wheels of planes that were taking off. At least five people were reported to have died.

Images from the airport showed US gunships buzzing groups gathered on the runway to enable military planes filled with US and foreign nationals to take off. Kabul’s airport, which had operated normally until Monday, is now closed to civilian flights.

“There is absolute chaos,” the official said. “Only US military planes are taking off and landing. The civilian part of the tarmac is completely shut — Afghans are clinging on to the tyres of the aircraft that are taking off. US marine helicopters are being used to clear the tarmac fast before the take-off can be executed.”

The mayhem reflects the pervasive fear and panic among Afghans as they brace themselves for life under Taliban rule. The sudden shift came after US president Joe Biden began the withdrawal of American troops from the country and the Islamist group drove the US-backed government of Ashraf Ghani from power over the weekend.

Kirby said US forces were working to re-establish security “following breaches overnight that emanated from the civilian side of the airfield”, adding that an additional 500 US troops were due to bring the number of US forces at the airport to 3,000 by Tuesday. “We don’t have any indication that they were Taliban,” he said, referring to the two individuals killed by US forces. “[We] obviously don’t want anyone else to get hurt.”

When the Taliban previously ruled Afghanistan from 1996 to 2001 it enforced a literalist interpretation of Islamic law, carrying out public executions, stoning women accused of adultery and cutting off the hands of accused thieves. It was subsequently driven from power by a US-led invasion following the terror attacks of September 11 2001.

The Taliban is now seeking to reassure Afghans that it has moderated its approach, and Mullah Baradar, a senior Taliban leader, publicly urged his fighters to show “humility” following their virtually bloodless seizure of the city on Sunday.

“We reached a victory that wasn’t expected,” he said in a video message from Qatar. “We should show humility in front of Allah. Now, it’s about how we serve and secure our people and ensure their future and good life to the best of our ability.”

Baradar added that the Taliban was negotiating with other Afghan political leaders over forming “an open, inclusive Islamic government”.

However, many Afghans — particularly educated women — remain intensely anxious. “The fear just sits inside your chest like a black bird. It opens its wings and you can’t breathe,” Muska Dastageer, a political-science professor at the American University of Afghanistan, wrote on Twitter.

Away from the airport, schools, government offices, colleges, banks, private offices and other businesses in Kabul were all shut on Monday. Only grocery stores and food stalls remained open.

“We are staying home for now, but it feels like a war situation,” said a Kabul-based university professor. “The Taliban has not yet clarified what they are going to do and what their policies will be towards women and schools. There is an overwhelming fear.”

Kobra Balooch, at the Afghanistan Civil Society Forum Organisation, said many Afghans were running short of cash because they “never expected Kabul to collapse that quickly. But Afghan people . . . have the experience of sudden chaos and usually hoard foodstuffs.”

The Taliban’s capture of Kabul followed a sweeping offensive that saw the Islamist group overrun most of the country, facing little armed resistance, as many Afghan troops opted to surrender peacefully rather than fight for an unpopular leader.

Taliban fighters took control of the empty presidential palace and abandoned police posts in the capital without a struggle on Sunday after Ghani fled the country to an undisclosed location. The Taliban has also reportedly freed thousands of prison inmates, many of them hardcore Islamist fighters associated with various militant groups.

Dominic Raab, the UK foreign secretary, said “everyone” had been surprised by the speed at which the Taliban had taken over the country, adding that his priority was now the evacuation of British nationals and “those who have so loyally served the UK”.

Angela Merkel, German chancellor, said the events in Kabul had shown nation-building efforts by the US and its allies in Afghanistan had failed, and must not be repeated in future international missions.

She said her thoughts were with the relatives of those soldiers who had died in combat in Afghanistan “particularly now, when everything seems in vain”.

The US, which still has almost 6,000 troops in Kabul, has also said their only remaining mission was to facilitate the safe and rapid evacuation of US civilians, other foreign nationals and some Afghan allies.

Ned Price, US state department spokesperson, said all embassy personnel had been moved out of Kabul and were congregated at the airport, where a de facto embassy had been established.

Once additional US troops had arrived to secure the airfield and remove the crowds that had made it too dangerous to operate aircraft, the number of evacuation flights was expected to increase, one UK defence official said.

Jake Sullivan, Biden’s national security adviser, said in an interview with NBC News on Monday that it was “heartbreaking” to see what was happening in Kabul but that the US president “had to make the best possible choice he could and he stands by that decision”.

John Bolton, former national security adviser to ex-president Donald Trump, said the image of Afghans struggling to hang on to US air planes as they took off from Kabul could become “the iconic picture of the Trump-Biden withdrawal from Afghanistan”.