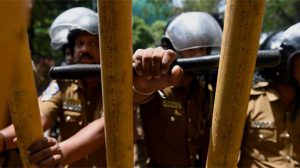 Several international human rights organizations, including the Human Rights Watch, have called for a review of Police Scotland training for Sri Lankan police in a letter to the Scottish government.

In a letter addressed to the Scottish Justice Secretary Keith Brown, the Human Rights Watch, Freedom from Torture, the Sri Lanka Campaign for Peace and Justice, and Pax Christi Scotland expressed their concerns over allegations of abuse by the Sri Lanka Police.

The letter demands Scottish ministers to exercise their authority to suspend the training program, which they claim risks appearing to endorse the actions of Sri Lanka’s police force.

The letter by the organizations:
“Dear Justice Secretary Brown,

We are writing on behalf of four human rights organisations for clarity about the current status of Police Scotland’s longstanding arrangement to train the Sri Lankan police.

The situation in Sri Lanka has deteriorated alarmingly since the election of President Gotabaya Rajapaksa in 2019. Abuses implicating the Sri Lankan police in past months include torture and other ill-treatment and extrajudicial killings. These incidents were described in a recent statement by Human Rights Watch, but are only the latest in a catalogue of abuses that have been documented for many years by our organizations and others, the media, and the United Nations.[1] In her report to the UN Human Rights Council in January, UN High Commissioner for Human Rights Michelle Bachelet described “the persistence of longstanding and endemic patterns of custodial deaths, use of torture and other ill-treatment, and extrajudicial killings by law enforcement officials with impunity.”[2]

A report in The Times on August 13, 2021, suggested that Police Scotland’s training programme has been “paused” since May “pending a review of its work it will carry out together with the Foreign Office.”[3] The Scottish government had previously only revealed that the programme was suspended due to Covid-19 travel restrictions, and a Police Scotland statement issued in July, marking a visit by First Minister Nicola Sturgeon to the Tulliallan police training centre, said that “in Sri Lanka, Police Scotland is half way through a three-year programme of work.”[4] In an August 6 letter responding to our request for a meeting with you, officials in your department defended the programme, made no mention of any “pause” or policy review, and said that implementation is a matter for Police Scotland.[5]

Police Scotland provided training to Sri Lankan police “on an almost continuous basis” from 2013 until the onset of the Covid-19 pandemic.[6] Police Scotland and your department contend that this programme is designed to enhance the Sri Lankan police’s respect for human rights, and that it particularly aims to reduce gender-based violence. The training also involves assistance in “community policing,” and in the past it has involved other components including crowd control.[7]

There is no evidence of any improvement in the human rights performance of the Sri Lankan police under the Gotabaya Rajapaksa administration. Our experience in Sri Lanka and elsewhere is that so long as there is no political will on the part of the government to end abusive police practices, no amount of “training” is going to bring significant improvements. Instead, continued training efforts merely appear to endorse the actions of an abusive police force.

On the training programme’s particular objective of helping to address gender-based violence, we note with dismay the recent comments by the Sri Lankan police spokesman, Senior Deputy Inspector General Ajith Rohana, who reportedly told a television talk show in August that the police would not pursue cases of threats or assault against a woman by her husband. “We do not proceed with these cases to court. We try to reconcile the matter. If we remand the person, the husband and wife will be separated, then what will happen to the children?” he was quoted as saying.[8]

It is our understanding that Scottish ministers have the power to intervene to prevent this training programme from continuing. Police Scotland is said to operate a “traffic light” system of red, amber, and green countries which receive training, with those on the red list requiring ministerial approval. We believe that Sri Lanka should be added to the red list. Material previously released under the Freedom of Information Act states that Scottish ministers must approve all overseas police training deployments, and that “ministerial approval is required under section 15 of the Police and Fire Reform (Scotland) Act 2012 (Temporary Service), where Police Scotland receives payment for the delivery of the training.”[9]

Police Scotland is paid by the UK Foreign Office to provide this training to Sri Lanka. In a parliamentary answer to a question lodged on February 2, your predecessor as justice secretary said, “Scottish Government ministers would also consider requests for further deployments of officers, taking into consideration a range of issues, including an examination of human rights implications.”[10]

We would greatly appreciate your providing details of the current “pause” and review of Police Scotland’s training of Sri Lankan police, including when the outcome of the review will be made public and the criteria by which the outcome will be determined. We urge you, as the minister responsible, to ensure that Police Scotland is not engaged in a relationship that is in conflict with your government’s values and stated commitment to upholding human rights. The current training programme should be halted until the Sri Lankan government and police demonstrate a genuine willingness to reform.