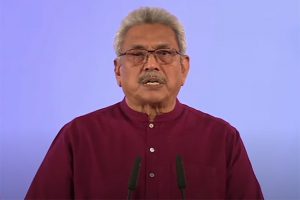 All citizens above the age of 30 years are expected to be fully vaccinated against COVID-19 by the 10th of September, President Gotabaya Rajapaksa said addressing the nation today (Aug. 20).

In his statement, the President stated that nearly 98% of the population aged over 30 years have received the vaccine so far, while approximately 43% of them were fully vaccinated.

The President is hopeful that the number of COVID-19 infections and deaths reported in the country would see a decline with the ramped-up inoculation drive.

“According to the accepted opinion of the World Health Organization (WHO), the majority of medical experts and the global standardized methodology, vaccination is the only solution for the COVID-19 pandemic.”

The President also spoke of the special efforts he had taken to import vaccines to Sri Lanka by personally contacting the Heads of State of India, China and other vaccine-manufacturing countries. “As a result of this effort, the country is now receiving a large number of required vaccine consignments monthly.”

Further, he stated that the health sector was directed to pay special attention to people aged above 60 years, who suffer from chronic illnesses and to refer them to Rapid Antigen Tests (RAT) at least once a week.

Speaking on the consequences of lockdowns, President Rajapaksa said the lowest economic growth of the country since the Independence was observed during the first wave of COVID-19 as a result of placing the country under a lockdown.

“Each time the country was placed under a lockdown due to COVID-19 risks, we spend around Rs. 30 billion in each round to provide an allowance of Rs. 5,000 to the people who have become helpless without a daily income,” he noted, adding that the government has borne this cost on a number of occasions.

In addition to the cost of quarantine centres maintained by the government, each family quarantined in their own homes is provided with a relief package worth Rs. 10,000 for two weeks, the President continued. “Even under this dire situation, the government has never taken any action to reduce the salaries or curtail the allowances of more than 1.4 million public servants.”

“This is not a time to carry out demonstrations or strikes,” the President pointed out while urging the public not to push the country towards anarchy.

Speaking on restriction of movement, President Rajapaksa requested people to prepare themselves to make necessary sacrifices if the country is forced to endure prolonged lockdowns.

The Most Venerable Maha Sangha,

Religious Leaders of other faiths,

The accepted opinion of the World Health Organization (WHO), the majority of medical experts and according to the global standardized methodology is that the vaccination is the only solution for the COVID-19 pandemic.

That is why, I made a special commitment to bring in vaccines to Sri Lanka in the recent past. I personally spoke to the Heads of Governments in countries like China and India. I personally wrote letters to several other Heads of State. Discussions were held with vaccine producing countries through our Foreign Ministry, Ambassadors and High Commissioners. Our officials coordinated with vaccine manufacturing companies.

All these efforts were made because I wanted to vaccinate all the people of our country.

As a result of this effort, the country is now receiving a large number of vaccines that we need monthly.

Initially, we received the AstraZeneca vaccine manufactured in India.

Afterwards, we were able to get the Sinopharm vaccine manufactured in China, but the administration of the vaccine to the public was delayed for about a month due to the delay in getting the vaccine approved by the National Medicines Regulatory Authority (NMRA). Nevertheless, the Government took measures to administer Sinopharm vaccine continuously since May 8 this year. In addition, we have received the Pfizer and Moderna vaccines from the United States, the AstraZeneca vaccines from Japan, and the Sputnik vaccines from Russia, placing us among the countries that administer the highest rates of COVID-19 vaccines to its people. As at the 19th of this month, a total of 12,019,193 vaccine doses have been administered as the First Dose.

Meanwhile, fifty-one million twenty four thousand one hundred and eighty five (5,124,185) vaccines have been administered to the people as the Second Dose. In addition, we have approximately three million doses of vaccines to be given as the Second Dose. Another 3 million doses will be received later in this month. At present, about 98% of the people who are above the age of 30, have been vaccinated while 43% have been given the both doses. By August 31, more than 81% of the population will be able to receive the second dose. By 10th of September, 100% can receive both the doses.

We continue to follow the restrictive measures such as imposition of inter-provincial travel restrictions across the country, isolation of Grama Niladhari Divisions, imposition of curfew, summoning only the essential public service employees to work, halting the functions like weddings, closure of certain businesses, ban on inter-provincial travel and prohibition of gatherings at places of worship.

We were able to successfully manage the first wave of the COVID-19 virus due to the actions that we took at that time. Such stern decisions had to be made at that time because there were no other options available at that time.

The country had to be placed under a complete lockdown for several months continuously. Through all these efforts, we were able to overcome the first COVID-19 wave.

Though we took measures to place the country under a lockdown occasionally, we should understand the consequences of this decision.

The lowest economic growth of the country since Independence was seen during the first wave of COVID-19 as a result of placing the country under a lockdown.

Especially, the apparel sector that brought in a revenue of about USD 5 billion to Sri Lanka was gravely affected. Their orders were stopped. Many lost their jobs. Export earnings fell.

Our tourism industry, which generated over USD 4.5 billion and provided a livelihood to over 3 million people, completely collapsed. Hundreds of thousands of jobs were lost.

The occasional lockdown of the country dealt a severe blow to the construction industry. They are not able to bring in employees they require. It is not possible to obtain the raw material at the required time. Over the past one and half years, we have lost most of the expected local and foreign investments in this sector.

Small and medium enterprises are another important sector of our local economy. The COVID-19 pandemic was a major obstacle for these businesses that contribute more than 50% of the GDP. Due to the continuous disruption of their business activities, these companies lost revenue and faced grave issues without being able to repay their loans or pay salaries.

Addition to this, close to 4.5 million self-employed personnel and daily wage earners became helpless since they lost their sources of income completely.

Each time the country was placed under a lockdown due to COVID-19 risks, we spend around Rs. 30 billion in each round to provide an allowance of Rs. 5,000 to the people who have become helpless without a daily income. The government has borne this cost on a number of occasions.

In addition to the cost of quarantine centres maintained by the government, each family quarantined in their own homes is provided with a relief package worth Rs. 10,000 for two weeks.

Even under this dire situation, the government has never taken any action to reduce the salaries or curtail the allowances of more than 1.4 million public servants.

The country’s economy would be in great crisis if the country was put under another complete lockdown. It is not a situation that this country can bear. A large number of orders have been received by the apparel industry in the export sector. If we are not able to deliver these orders on time, we may lose a large amount of foreign exchange.

We are also making great efforts to rebuild the collapsed tourism industry. At the moment, nearly 200 tourists enter the country on daily basis.  If we close down the country, we will have to restart attracting tourists from the very beginning.

Moreover, by having to provide relief to the daily income earners, small and medium enterprises and companies once again due to a lockdown, the country’s economy will be gravely affected. The people should understand the impact of a complete lockdown. Today, except for a few countries, most others including economically powerful ones have fully opened up.

The tourism industry in the world is gradually recovering. The countries that are open today are taking advantage of that opportunity. Our country, which has a small economy should also take advantage of this opportunity. We can’t allow the country’s economy to collapse completely by refusing to take required action.

However, I have decided to impose a lockdown from 10 pm today till 4 am on 30th Monday of this month in order to contain the increase of COVID patients.

This situation is not a rivalry or conflict between different ideologists, trade unions, doctors, other health officials and the government. We have to understand the reality. This is a serious issue that the whole world faces. Today, all the countries are adapting to the method of ‘New Normal’. As a government, we have properly taken all necessary measures that need to be taken.

Although the government does everything it can to provide oxygen, establish intermediate treatment centers and administer vaccines, it is the role of the doctors to manage patients appropriately. Also, I highly appreciate the service rendered by the doctors, nurses and all other health sector officials so far, despite the risk to their lives. I also pay my respects to the health sector officials belonging to all ranks who have sacrificed their lives.

It is clear that this is not a time for strike actions and protests. Do not attempt to destabilize the country.

Although the health sector looks at this issue from one angle, as a government we will have to manage the small economy in our country if we are to continue to pay off foreign debts, pay salaries, and provide subsidies without any interruption.

I request everyone in the country to be prepared to make more sacrifices, if the country is to be placed under a lockdown for a longer period of time in the future.

At this crucial juncture, everyone should take the country forward strategically by acknowledging the gravity of the situation.

Therefore, I respectfully request everyone to work together in unity as a team to defeat the COVID-19 pandemic.

May the triple gem bless you!