The Department of Prisons has decided to launch an inquiry into the incident where a prison hospital doctor had allegedly been threatened by MP Rishad Bathiudeen who is currently under remand custody. 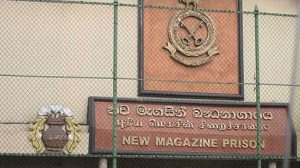 The inquiry will be carried out under the supervision of an Assistant Superintendent of Prisons, the Prisons Media Spokesperson said.

A doctor at the Magazine Prison had lodged the complaint with the Colombo Crimes Division (CCD) accusing Bathiudeen of leveling threats against his life, which subsequently prompted investigations.

As per the complaint, MP Bathiudeen had obstructed the duties of the doctor while he was treating an inmate on the 15th of August.

Reportedly, the doctor, who asked MP Bathiudeen to wait outside for his turn, has been told that his service is not required since the parliamentarian is capable of calling a doctor acquaintance. Then the former minister has allegedly threatened the doctor, saying that he can have him transferred while also threatening to end the doctor’s life. He had allegedly stated that he has parliamentary privileges and is treated well by both Government and the Opposition. The threat has also extended to the point that the lawmaker had purportedly asked the doctor to find a good place to hide.