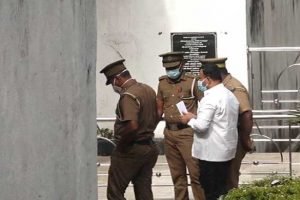 MP Rishad Bathiudeen is once again under the spotlight after a doctor serving at the Magazine Prison, where the parliamentarian is remanded, accused him of levelling threats against his life.

The Colombo Crimes Division (CCD) launched investigations into the incident based on a complaint filed by the relevant doctor with the Borella Police.

The doctor had lodged the complaint after informing the chief medical officer and a senior officer at the prison both verbally and in writing.

According to the complaint, MP Bathiudeen had obstructed the duties of the doctor while he was treating an inmate on the 15th of August.

Reportedly, doctor, who asked MP Bathiudeen to wait outside for his turn, has been told that his service is not required since the parliamentarian is capable of calling a doctor acquaintance.

Then the former minister has allegedly threatened the doctor, saying that he can have him transferred while also threatening to end the doctor’s life.

He had alleged stated that he has parliamentary privileges and is treated well by both Government and the Opposition.

The threat has also extended to the point that the lawmaker had purportedly asked the doctor to find a good place to hide.

Reportedly, the investigating officers recorded statements from the relevant doctor, who was summoned to the CCD this evening.

In the meantime, a special police team of the CCD visited the Magazine Prison today for inspection. – ada derana