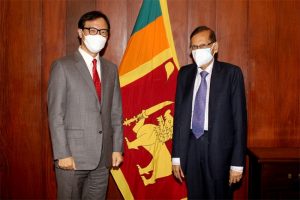 The Ambassador of the Republic of Korea to Sri Lanka, Santhush Woonjin Jeong has paid a courtesy call on the newly-appointed Foreign Minister Prof. G.L. Peiris today (August 24) at the Foreign Ministry.

The ambassador extended sincere felicitations to the Foreign Minister on his new role and reiterated his country’s commitment to assist Sri Lanka in bilateral and multilateral settings on matters of mutual interest, the Ministry of Foreign Affairs said in a statement.

The discussions were centred on a wide range of areas of existing and potential cooperation including education, science, information technology, digitalization, pharmaceutical production, labour migration, people-to-people exchanges and partnership in multilateral engagements. A particular emphasis was placed on the importance of development of Korean language education in Sri Lanka, enabling direct and effective exchanges between citizens, businesses and institutions between both countries.

During the meeting, Foreign Minister Peiris reiterated the significance of Sri Lanka-Korea bilateral relations which continue to be mutually beneficial with potential for further expansion and expressed appreciation for Ambassador Woonjin’s sentiments towards Sri Lanka and its people.

They agreed to explore further avenues for expanding trade and economic relations between the two countries which can be diversified into new development projects and investments.