Showers will occur at times in Western, Sabaragamuwa, Central and North-Western provinces and in Galle and Matara districts, the Department of Meteorology said in its weather forecast today (August. 28).

Heavy rainfall above 100 mm can be expected in parts of Western, Sabaragamuwa, and Central provinces (particularly in Colombo, Gampaha, Kalutara, Kegalle, Ratnapura, Kandy and Nuwara Eliya districts) as well as in Galle and Matara districts.

In the meantime, a few showers will occur in Anuradhapura district.

Some areas in Uva province and in Ampara, Batticaloa and Hambantota districts will receive showers or thundershowers after 2.00 p.m.

Fairly strong gusty winds up to (40-50) kmph can be expected in the western slope of central hills, Northern, North-Central and North-Western provinces and in Hambantota and Trincomalee districts.

The Met. Department urged the public to take adequate precautions to minimize damages caused by temporary localized strong winds and lightning during thundershowers.

On the apparent southward relative motion of the sun, it is going to be directly over the latitudes of Sri Lanka from August 28 to September 07 in this year. The nearest towns of Sri Lanka over which the sun is overhead today are Sangupiddi and Palaly.

There is a possibility that near shore sea areas off the coast extending from Puttalam to Hambantota via Colombo and Galle may experience surges due to the effect of swell waves, having (2.0-2.5) m height.

Naval and fishing communities are requested to be vigilant in this regard. 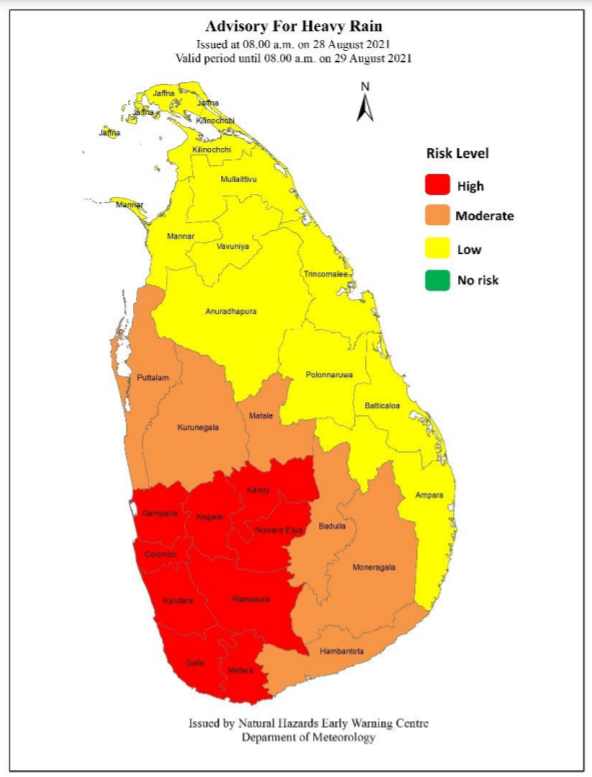