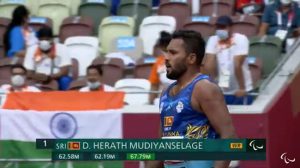 He becomes the first ever Sri Lankan to win a gold medal at the Paralympics.

India’s Devendra Jhajharia won silver in the event with a throw of 64.35 while India’s Sundar Singh Gurjar bagged bronze with an effort of 64.01 in the Men’s Javelin Throw F46 Final.

He had also claimed silver medal in men’s 46 category at the 2019 World Para Athletics Championships by clearing a distance of 60.59 meters.