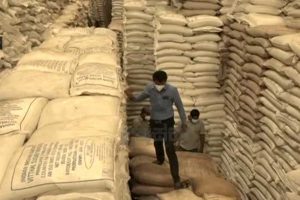 Following the exposé made by Ada Derana ‘Ukussa’ on the truth behind the artificial market shortage of sugar, more warehouses stashing away large stocks of the product were tracked down by the Consumer Affairs Authority (CAA).

During the raids, a total of 11,070 metric tons of sugar was recovered from warehouses in Hekitta, Enderamulla, Uswetakeiyawa and Heiyanthuduwa areas. It was revealed that these establishments had stockpiled the products for more than 8 months despite having permits.

CAA officials found 5,500 metric tons of sugar from a warehouse in Enderamulla, Wattala, owned by the Sathosa. Reportedly, this consignment had been imported by a private company in January this year. The warehouse was accordingly sealed off by the authorities.

In another development, 600 metric tons of sugar, manufactured nearly a year ago, was recovered in a licenced warehouse in the area of Uswetakeiyawa, Wattala.

Further, CAA officials managed to uncover a large volume of sugar weighing up to 1,200 metric tons from a warehouse in Hekitta, Wattala. As per reports, these stocks contained products manufactured by Hingurana, Pelawatta and Sevanagala sugar factories.

Another massive quantity of sugar was found from a licenced warehouse in Heiyanthuduwa area. A total of 3,770 metric tons of the product had been stashed away in the establishment for the past 08 months.

In the meantime, President Gotabaya Rajapaksa declared emergency regulations on the provision of essential foods, which came into effect from midnight on Aug. 30.

The regulations apply to the supply, selling at higher prices, and hoarding of essential food including paddy, rice, and sugar. The President declared these regulations under the powers vested in him subject to Article 2 of the Public Security Ordinance. – ada derana