Sri Lanka won the first ODI against South Africa by 14 runs to take a 1-0 lead in the three-match series at the Premadasa Stadium in Colombo. 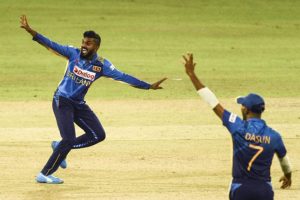 Sitting pretty at 155/1, South Africa looked well poised to successfully complete the chase, but then skipper Temba Bavuma (38* off 53) was forced to retire hurt with an injured finger.

Bavuma was on the receiving end of a throw back to the wicketkeeper that hit him flush on the hand, and while he soldiered on for another couple of overs, he eventually returned to the dressing room with the pain obviously overwhelming.

Bavuma and Aiden Markram (96 off 90) had compiled a partnership of 106 by that stage and that left the Proteas in a position were they would have considered themselves favourites.

Soon after Bavuma retired, however, Markram was dismissed four runs short of what would have been a maiden ODI century.

When Rassie van der Dussen (59 off 59) and Kyle Verreynne (12 off 20) came together, however, the run rate started climbing as the Sri Lankan spin started to take control.

Heinrich Klaasen’s 36 (31) was in vain.  In their chase, South Africa simply didn’t have the firepower to strike when it mattered most.