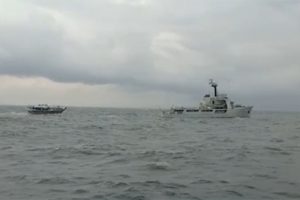 Sri Lanka Navy has intercepted a foreign fishing vessel carrying a large volume of heroin in the international seas off the southern coast of the island.

Seven crew members who were on board at the time of the interception were also taken into custody, the Navy Spokesman said in a statement.

A special operation was initiated by the naval intelligence unit and the other naval personnel based on intelligence information received by Sri Lanka Police in this regard.

The apprehended foreign nationals, the vessel and the contraband are being brought ashore, to the Colombo Port, the navy spokesman stated further.

They will subsequently be handed over to the Police Narcotics Bureau (PNB) for further investigations. – ada derana