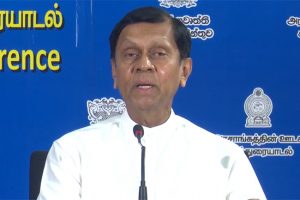 State Minister of Money, Capital Markets, and State Enterprise Reforms, Ajith Nivard Cabraal, says that the government has sufficient plans in place to meet all its debt repayments and maintain a spotless record.

Speaking on the state the economy at a special media briefing held earlier today (Sep. 03), the state minister addressed the country’s foreign exchange position. He stressed that the government is doing everything to ensure a stable rupee.

Sri Lanka is a country dependent on tourism, the state minister continued, admitting that the government did have a challenge on its hands when this sector was completely disrupted by the outbreak of the COVID-19 pandemic. The situation led to a challenge to deal with the country’s inflows and reserves in a manner that it can still maintain its services, all other factors of the society and commercial activities in a stable way, Cabraal explained.

The state minister noted that the government had to impose some restrictions on certain imports such as vehicles in order to ensure that sufficient funds are available to meet the debt repayments as well as to ensure that the foreign exchange required for all our activities is available in the country.

Despite pandemic challenges, growth expectations are still upbeat, Cabraal added. Sri Lanka’s third quarter of 2021 has been to some extent curtailed in growth activity owing to the partial lockdown in the country, but in the year 2021, Sri Lanka would be in a position to have a reasonably modest growth, he said.

“Overall, the forex situation is being handled very carefully.”

Speaking on the continued insistence by the Opposition for the government to reach out to the International Monetary Fund (IMF) for assistance, State Minister Cabraal said there is a plan in place which will make sure that Sri Lanka maintains its spotless debt repayment reputation.

“We do have respect for the IMF. We have worked with them in the past as well.”

However, the government has now identified the needs and the requirements of the country, the state minister emphasized. “We are working that out in the best way possible in the interest of all our stakeholders. […] We are confident that with our plan that we have put in place as well as the new initiatives that we are taking, we would be able to ensure that Sri Lanka will not have to default at any time in the near future or even in the foreseeable future.”

Addressing certain reports on debts received from China, Cabraal stated going by current data on where Sri Lanka’s foreign debt lies, any allegations of the country being stuck in a Chinese debt trap is pure rubbish.

Sri Lanka’s debt to China is extremely well-managed and the country is not under pressure from Chinese debt, he added, dismissing the speculations and assuring all creditors that debts will be paid on time.

It is a myth that Sri Lanka is in a debt trap caused in consequence of borrowing from China, Cabraal reiterated. If people were to look at the debt profile of Sri Lanka as well as the debt servicing cost, they would realize that the country has the ability to repay and that no lender can control Sri Lanka’s way forward, he said further.

Addressing the recent claims on food shortage in the country, which garnered the attention of international media, Cabraal explained that such speculation was unwarranted and far from the ground reality.

The country has ample food stocks for all needs, the state minister assured. “There is absolutely no shortage. We have enough and more food for the foreseeable future and beyond. If anyone who suggests otherwise it simply is not true.”

He blamed the shortages of certain food items as attempts by whom he termed “unscrupulous traders” who were trying to profit from the country’s current pandemic situation by hoarding the products.

“That situation had to be dealt with very quickly and that is what the government has done. Any responsible government would have done that and in order to do so in a framework of legality we have invoked certain laws.” – ada derana