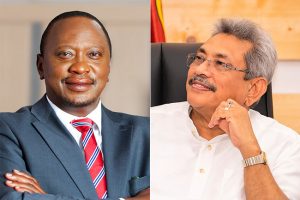 While expressing satisfaction over the growing bilateral relations between Sri Lanka and Kenya, the two leaders have stressed the need to further enhance this cooperation.

President Kenyatta has commended the COVID-19 control measures taken by his Sri Lankan counterpart and the success of the island nation’s vaccination program.

He said the inoculation drive which has already covered almost 70% of the population is an example to other nations as well.

Though the numbers of positive cases and deaths were managed well by controlling the COVID-19 pandemic, President Rajapaksa pointed out that the new variants emerged in the middle of this year. He added that Sri Lanka has always proved to be resilient by facing various challenges in the history, while assuring that the island nation will successfully rise again by controlling the pandemic.

Recalling his close relations with former President and current Prime Minister Mahinda Rajapaksa, President Kenyatta expressed keenness to maintain close ties with President Gotabaya Rajapaksa and Sri Lanka for the mutual benefit of the people of both nations.

Kenya is one of the main countries in the East Africa and maintains a long-standing friendship with Sri Lanka. The diplomatic relations between the two nations reached 50 years in 2020 while the bilateral cooperation in the economic, trade, investment and political spheres have reached a new height. – ada derana