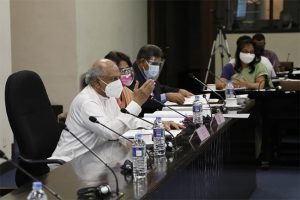 Local Government Election System Review Committee has recommended that the unusual growth in the number of members in local government bodies should be controlled.

The report submitted by the three-member committee, appointed by the Minister of Public Services, Provincial Councils and Local Government to review the local government election system was taken into consideration at the Parliamentary Select Committee to Identify Appropriate Reforms of the Election Laws and the Electoral System and to Recommend Necessary Amendments, on Thursday (Sep. 02).

The summary of the review committee was presented by Mr. R.A.A.K. Ranawaka, the Secretary to the Ministry of Lands and Land Development in his capacity as the committee’s chairman.

Prof. Sudantha Liyanage, the Vice Chancellor of the University of Sri Jayewardenepura and a member of the National Delimitation Committee, stated that the unusual growth in the number of members in local government bodies should be reduced to a fixed number as decided by the committee.

He added that 70% of the members in the local government bodies should be elected on a divisional basis and the remaining 30% on a proportional basis.

Prof. Sudantha Liyanage, stating that the review committee recommends the use of proportional representation system when choosing Members of Parliament in calculating the number of members in local government institutions, also commented that the bonus seat system applied should also be applicable.

One of the weaknesses the committee observed in the current mixed proportional representation system was the failure to introduce any bonus seats for the winning parties. He added that the review committee is hopeful that the introduction of bonus seats will reduce the instability in local government bodies.

The committee also pointed out that the manner in which members are to be elected for multi-member constituencies should be changed and the procedure prescribed in Act No. 22 of 2012 should be applied for that purpose. Former Secretary to the Ministry Jayalath Ravi Dissanayake has also been a member of this review committee.

Minister of Education Dinesh Gunawardena, the Leader of the House and the Chairman of the Parliamentary Select Committee, noted that the will of the people is to maintain local government bodies with a minimum number of seats. However, he pointed out that there must be a member responsible for a particular division.

The Attorney General’s conclusive remarks regarding the Provincial Council Elections (Amendment) Act No. 17 of 2017 were also tabled at this Parliamentary Select Committee.

In addition, the “Report on Local Government Elections” submitted to the Committee by the Sri Lanka Muslim Congress was also tabled.

Basil and Hakeem appointed to PSC on election law reforms